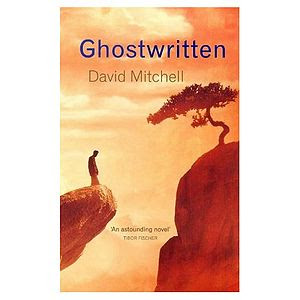 i wanted to say that it’s not america they’re aping, it’s the japan of their parents that they’re rejecting. and since there’s no homegrown counterculture, they just take hold of the nearest one to hand, which happens to be american. but it’s not american culture exploiting us. it’s us exploiting it.
-satoru

this is one of the powerful lines that caught me so far while reading david mitchell's novel ghostwritten. satoru, a half-filipino, half-japanese kid who loves jazz music, is one of the poignant characters of the novel. the novel features chapters in various places around the globe (mongolia, london, okinawa, petersburg) i am still stuck at hongkong. i'll tell you more about the book after i move forward to different places. sleep always punches me down in a chapter for days whenever i will try to read on the bus and on the train.
Posted by bulitas at 3:29 pm

mukhang interesting yung book a. i'll look for a copy :)

i hate you! you're one reason why i have a long list of books and movies in queu! hahaha!

sounds interesting! and the title is very catchy. i love books with depth---i mean who doesn't? hehe! thanks for this, bulitas!