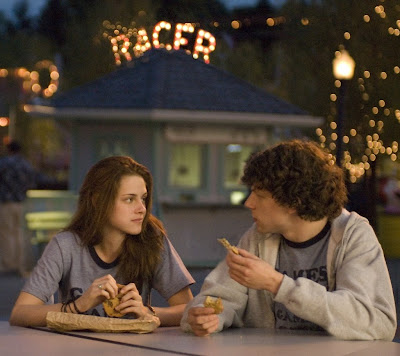 james (jesse eisenberg) is a comparative literature major whose graduation is not really the most pleasant of all. his less than two weeks girlfriend breaks up with him after he confesses his virginity and then he learns that his parents will not be able to fund his europe trip and his college education after his dad was transferred to a new job with a lower salary which leads him to find himself a summer job as a games host at the local amusement park in their town- adventureland.

james thinks that summer will be a bummer and boring (as the lightly desaturated hues of the movie to adapt to the 1987 setting) because of the job hours and the salary until he meets em (kristen stewart). since then, things get better and more exciting than taking a roller coaster ride and winning a giant ass panda that nobody ever wins.

writer/director greg mottola adds a spin of superbad with a great mix of romance, love, pain, drama and hope to this movie that can leave you high like em’s chocolate chip pot cookies.

since i always find comfort in the aura and the sensation brought by old songs, falling in love with the soundtrack is a breeze. inxs, crowded house, david bowie, the replacements, the cure, and the velvet underground are some of the artists that delivers great music throughout the film.

adventureland is almost like nick and norah’s infinite playlist but is more attractive in some ways. perhaps it’s the classic pop music, the laidback life, the pot sessions, the virgin love affair, the random adventures and the life itself of the characters.
Posted by bulitas at 11:21 pm

i have yet to see this one... sounds really good!