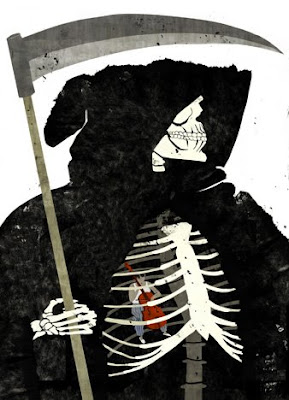 the moment the clock hits the start of the new year, nobody died in this particular country of the world. no one, even the decapitated ones, even those who are about to die the next second, even the wounded ones, no one died at the stroke of midnight signaling the start of a new year. it puzzles people, alright. for a while, it generates the air of delight for at long last, humanity has achieved immortality, god has favored humans. for quite some time people think that life couldn’t be any better if spent in eternity not until they realized the imbalance and the impending chaos caused by this phenomenon.

funeral services will be down, hospitals will have no more room for the almost dying and the supposed to be dead but cannot be dead people, the government will have to devise a plan to implement order regarding incessant population growth, the church must find ways to explain to the faithfuls the blasphemous (according to them) phenomenon for if there is no death there is no resurrection which therefore voids the existence of god, the insurance agencies must create an effective way to manage and revise their insurance policies, and the state must find ways to control the desperate measures that people will do just to provide death to their should have been dead loved ones. all of these scenarios and all the other implications of the sudden absence of death are narrated in detail by author josé saramago in his book death with interruptions.

in the book, the reader can hear the thoughts of death with the lower case “d” who is described as bony and cloaked with her black hood and cloak. she is presented as someone who is omnipresent as god, but she is not in any way like god. for death, like most of us humans, also thinks that there is a supreme and far more superior being than her somewhere in this universe.

in the midst of the budding pandemonium at the place devoid of death, death issued a letter enclosed on a purple envelope that tells the people of her return by midnight. as a natural impulse, various institutions of the society succumb themselves once again into the pits of chaos. panic emerges and tries to rule the air. when death sees this, she made an arrangement. she decides that form then on, she will issue a purple envelope to everyone one week prior to their death for them to properly lay down their wills, pay their taxes, say goodbye to friends and whatever they think is necessary to do in the remaining days of their lives. death’s plan takes some time before it runs smooth. then slowly, things go back to normal again, having death back in the cycle of life brings back the necessary balance in the lives of humans.

then one day, as if conspired by fate and all the other metaphysical, spiritual and astronomical forces of the universe, death receives one purple letter back. this means that somebody who is supposed to die did not get his/her records. no, death’s plan cannot be foiled. so she did the necessary things she thinks she must do to carry out the death of that particular person. she sends the letter again and again but the purple envelope keeps coming back to her so she decides to see the person herself. disguised as a young small lady, death visits the person and is surprised to see an old cellist with a dog.

after death decides to leave the task of distributing the purple letters to her scythe, she follows the life of the cellist to discover the mysteries of this special person who is supposed to die at 49 but is now 50 and discovers something that she least expect to happen- that is to fall in love.

saramago’s style of magic realism, infusing fantastic elements into reality, is infectious as his long sentences most of the time separated by commas a la nick joaquin’s tropical gothic. the seamless integration of the voices of the various characters and the narrator while speaking (again, most of the time separated only by commas) helps the text to become more engaging to the reader. aside from the fact that i am in a rush to finish reading the books i bought before i could buy new ones, the scarcity of periods helps me finish the book in a week while taking the train downtown.
Posted by bulitas at 3:51 am

sounds like a very fascinating book. i'll try to find this, after i finish reading "love in the time of cholera".

ano nga kaya kung maging immortal ang mga tao for a moment.hehe! thanks for this.