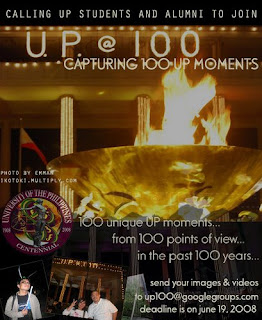 i got this announcement from the menthol guy who is also one of the organizers of this activity.
so this is an invitation for everyone in up and who has been a part of the university over the years.

Along with a group of UP bloggers, we have come up with a special project for the UP Centennial Month this coming June. It’s called “UP@100: Capturing 100 UP Moments“ -

It is a Music Video Project which will compile 100 photos and videos from participants consisting UP alumni and students. It aims to capture 100 unique UP moments from 100 different points of view in the past 100 years of the University’s existence.We are inviting YOU to join us in this endeavor.Mechanics:

How to submit an entry

I. Who can participate:

II. How to submit your photo or video:

3. Entries could be submitted by doing at least one of the following:
* Sending them with file (photo/video) attachments to up100[at]googlegroups[dot]com or utakgago[at]yahoo[dot]com.

4. Only ONE of the entries submitted per participant will be selected.

5. The deadline for submissions is on June 19, 2008. A day after the UP Centennial Anniversary (so that photos from the centennial celebration could be included).

7. A microsite will be created for the project where all (part of the 100 or not) the submitted photos & videos will be posted in sync with the video launch.

We are very excited in this project and I hope many of you can join! Looking forward to your great UP moments! :)


DISCLAIMER: The UP@100 Project is in no way related or connected to the official Centennial Activities of the University of the Philippines. This is a volunteer effort and project by several UP students and alumni.
Posted by bulitas at 12:23 am