is that all there is?

i heard the statement days ago from a random pinay bus passenger who was all sweaty, ranting about her misfortunes at such early time of the day.
this movie is engaging just like the other scorsese films that i’ve seen so far (the big shave, the aviator, the departed) but in a highly humorous and entertaining way.

paul heckett is a word processor who meets a girl in the coffee shop who also knows henry miller, the author of the book that he is reading. they conversed for a while and the girl left him with her number and told him that she lives with a soho sculptress who makes cream cheese bagels paperweights. later he phoned her in to visit her apartment, pretending to take interest with the cream cheese bagels paperweights. he never knew that his meeting with marcy, the coffee shop girl, would spark the series of incidents that would lead him straight to the face of trouble.

after hours, he met a fire escape rape victim, a soho artist who’s into bondage, a couple of thieves, a cocktail waitress: miss beehive 1965, a bartender who offers him cash but had a broken cash registry so he had to ask him to get the keys back at his apartment, a mister softee ice cream lady truck driver, and a lone sculptress who lives in a basement of a bar.


poor guy. all he wants to do is to go home but trouble has grown fond of him and will not let go of him until the break of dawn.

while watching the movie, you may find yourself wondering about so many other things that he could have done to go home. he could’ve just walked on his way home, or he could’ve just borrowed money from all the ladies who fancied him instead of experiencing all those troubles. but if he did, the schadenfreude will be absent and it will be less fun.

by the way, the soho sculptress who makes cream cheese bagel paperweights and a statue that looks like edvard munch’s the scream who is into bondage and mohawk reminds me of the philippine comedienne/singer kaye brosas. win! 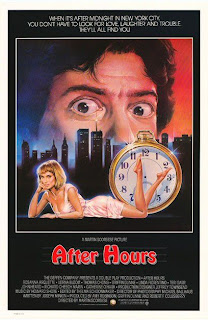