don’t judge the book by its movie

chris columbus’ percy jackson and the olympians: the lightning thief is like most of the disney channel movie specials that i’ve seen, only an ounce better. it is like the wizards of waverly place the movie but with bigger adventures and more expensive sets and with extra special effects. could it pass as an appetizer, an introduction for kids to the vast world of greek mythology? maybe. it is cute and funny, but not engaging enough to inspire me to learn more about greek mthology.

watching it is like riding a rollercoaster in some random town carnival. the excitement of the ride comes from the risk of riding itself and the fear of falling. you are lucky if you have friends and family to laugh the experience with you. somehow, laughter compensates for the lack of loops and twists that a local carnival roller coaster can offer.

the characters are cute that sometimes their cuteness acts as a buffer for their stupid acts.

i’ve read that the actual book series of percy jackson and the olympians by rick riordan is actually way better than the movie. i can’t say much until i get to read the series myself. but just like any other movie adaptation of a good book, some things were lost during translation. although comparisons are inevitable, the audience must note though that the movie and the book are two different and separate mediums. 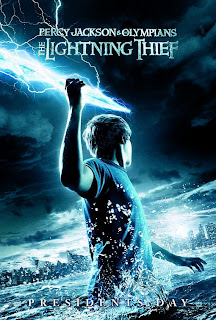