all work and no play makes jack a dull boy

the shining is one hell of a mind trip that makes you wonder if this stanley kubrick’s adaptation of the stephen king novel of the same name makes you a talking boy who lives inside your mouth. 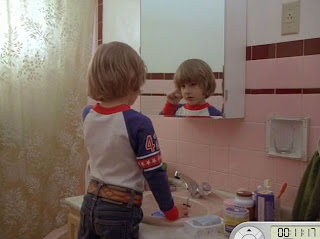 danny, with his finger talking as tommy, the boy who lives in his mouth

the haunting silence, the bouncing echoes on the walls of the overlook hotel, the retro horror instrumentals, and the slow camera movements, especially those that mimics the perspective of the characters witnessing horror and danger in front of them, is an effective shocker that can double your heartbeats for quite some time.

it is that type of movie that can make you question the real from the unreal, the essential from the mundane, and the imaginary from the reality.

jack nicholson’s performace as the seemingly possessed writer jack torrance was as haunting as danny lloyd, who plays danny torrance, his young son who bears the gift of the shining and an alter ego named tommy who lives inside his mouth.

my favorite scene was when jack was slowly following her threatened wife with a bat upstairs and the camera takes her perspective so the audience can see jack nicholson’s distorted face filled with psycho lust and anger.

this movie is far from the horror movie that i expected. this one is far from the ring, the shake rattle and roll and the friday the 13th genre. as i’ve said, this is one hell of a fuckin mindtrip that you will surely enjoy if you’re into those kinds of flicks. 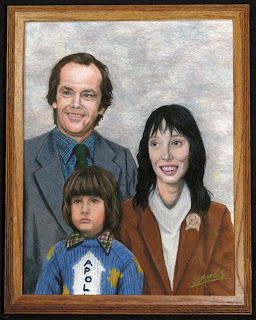 above is artist kirk demarais' crazy 4 cult 3-d family portrayal of the torrance family
Posted by bulitas at 12:48 pm