out and about man’s lunacy in duncan jones’ moon 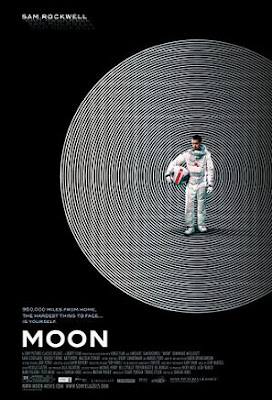 at a certain point on the course of the vicious cycle of the clones’ life, reality will knock hard on the doors of their senses that will let the outer space air of enlightenment and hope enter their souls and humanity.

duncan jones’ film, moon (2009), is a genius masterpiece of its sci-fi kind. it is that kind of movie that probes the deeper regions of human emotions and subconsciousness. it questions the established moral and ethical codes of societies and it presents possible outcomes of mankind’s greed, manipulative nature, and masstarvation of power.

moon is set in a time when a company called lunar industries provides the cheap and necessary clean energy to earth from helium-3 extracts from lunar soil.

it follows the story of sam bell (sam rockwell) and his 3 year contract as the astronaut in a remote lunar station. he is accompanied by gerty, the robot that flashes disturbing yellow emoticons who helps him through the duration of his mission to man the station and to find more helium-3 extracts.

the opportunity cost of sam’s astronomical endeavor is his supposed to be quality time with his wife and daughter.

duncan jone’s direction and nathan parker’s screenplay will guide your senses slowly and deeply into the life of a lone astronaut living on the far side of the moon. the seemingly slow pace of the film, the a la big brother house/mental ward feel atmosphere, plus the chilly, mysterious, melancholic score and music of clint mansell provides the perfect set-up to set you in the mood and feel the character’s boredom, loneliness, anger, longing and hope.

sam’s discovery of his existence as a clone as well as the presence of other clones led him to challenge the system and think of creative ways to break loose from his lunar prison.

see, this movie is like drug that gives that “high” feeling of drowsiness, excitement and fear all rolled into one. this is definitely for the win.
if only sam’s character could have shown more violence, the titles clone rebel or the attack of the clone or the clone strikes back would be perfect.

like a full, blue, moon, on the cloud tainted sky, this movie remains as a mysterious and glowing work of science fiction.
Posted by bulitas at 2:49 pm