watching the growth of the relationship between mary and max strengthens my belief that long distance relationships can actually work, given that both parties make a constant effort to communicate and to satisfy the needs of each other. 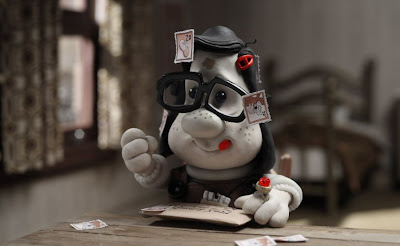 the film starts with the introduction of the 8 year 3 months and nine days old mary daisy dinkle. she had a birthmark the color of poo. her favorite food is sweetened condensed milk. she would like to have a real friend who isn’t made out of seashells, twigs or chicken bones.

meanwhile, on the other side of the world exists max jerry horowitz a 300 pound atheistic jewish who has aspergers syndrome and an addiction to chocolate hotdogs. he once worked in a condom factory but never used one. max longs for a friend who isn’t invisible.

one day, mary decides to pick a random name from a united states residential directory listing. as if conspired by the vast unfathomable universe, mary’s finger landed on max’s contact information. she then sends him her first letter that will ignite the sparks of their continuous correspondence. in time, mary and max became best friends talking about their life, their frustrations, their, simple sources of joy, their anxieties, depression, dreams and love.

throughout the course of the film, we can see how mary and max grows to develop and nurture their long distance relationship with hope and the comfort that somewhere out there, somebody us willing to listen to whatever you say without prejudice. they keep each other satisfied with the feeling that there will always be someone who will accept them despite their numerous imperfections and frustrations in life. of course, we also see some of the downfalls of long distance relationships. immediate comfort can never happen. the absence of physical contact can add up to the welling hole of insatiable longing. and of course, most delayed reactions for certain acts that requires instant attention often causes a tragic results.

the story of these two individuals also shows us that although there are millions of things that we cannot choose and we cannot control in life, we can at least choose our friends. mary and max choose to be friends with each other and continue their friendship through their exchange of letters.

at the end of the film, i realized that relationships whether long distance or not, will work best if both parties possess and exhibit self-love. self-love is essential in order for other people to love you. do appreciate, believe and love yourself in the first place, and the rest of the world will follow.

this wonderfully crafted claymation often appears dark and gloomy (no, it’s not the monochromatic treatment, mind you) but it never forgets to inject its own version of life’s jokes and comedies throughout the movie. no wonder it became the special selection during the opening night of the 2009 sundance film festival. since then, it has gained numerous awards from film and animation festivals all around the globe.

*watch the trailer here
Posted by bulitas at 2:37 pm

i wonder when they'll show this in the phil?