she’s out of my league is an awkwardly funny romantic comedy that is filled with scenes that overflows with awkwardness. it’s like summoning back that kind of awkwardness you experience whenever you get an unexpected boner in front of your parents. the movie is cute, actually. but it’s cute-awkward.

it follows the story of kirk kettner (jay baruchel),an airport transportation and security administration personnel haunted by the spirits of his low self-esteem issues, who crossed paths with the blonde beauty molly mccleish (alice eve, the lady who by the way will also play emma frost in the upcoming 2011 movie xmen: first class) .

the awkward scenes stems from jay baruchel’s effective aura of awkwardness combined with hardcore dorkiness. the guy is so effective in playing the role of the stereotypical loser dork that he can pull off his role perfectly even with minimal effort.

the lines are funny. there is also this scene where kirk and his friends rate people from 1-10 based on their physical attributes that makes them hotter and better than others. the initial ratings of kirk’s friends? kirk is 5 and eve is 10. therefore they foresee an inevitable compatibility issue with the two.

baruchel and eve had their moments, plus there are some oddly heartwarming scenes from kirk and his friends who will do anything to help him win back molly after their misunderstandings.

the story was concluded with a happily ever after ending when kirk, with help of his friend stainer (t.j. miller) realized that he can be more than what he thinks he is if he wanted to.

so there goes one hour and 44 minutes of my saturday morning. 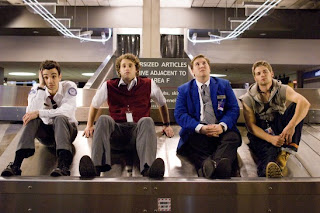