a kaleidoscopic look at a medieval tale of courage

a kaleidoscopic look at a medieval tale of courage

the secret of the kells lies in the power of one’s imagination and unwavering determination to follow your heart.

i love this animated film because it comes as a breather from most animations that i have seen so far. it is like watching kaleidoscopes of colors and patterns transform into dynamic moving patterns that tells a story of stories.
thanks to lolo efbee who led me to the path of brendan, the abbot, brother aidan, the cat and aisling. 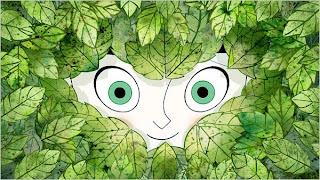 the secret of the kells (working title: brendan and the secret of kells) is a 2009 irish animated feature set in the 9th century when the vikings spread fear and chaos on the land. the story follows the adventures of brendan who lives under the cloak of his abbot uncle who leads and protects his people within the walls of kells.

one day, an old master illustrator with a cat, brother aidan, arrives at the vicinity. he meets brendan and sparked his interest to pursue his talent and expand his creativity in order to finish the book of kells. the book is like their bible with moving colorful illustrations filled with intricate patterns and designs. in order to finish the task, brendan must train from brother aidan the art of writing and illustrating. in doing so he must gather some rare green berries that they will use for ink. he also needs to find “the crystal” the eye of the serpent crom cruach to better fulfill his craft.

on his journey, brendan often finds himself in conflict with his uncle who forbids him to go anywhere out of their settlement’s heavily fortified walls. he also met aisling, a fairy girl who lives in the forest, who helps him find the berries as well as the way to find the serpent. 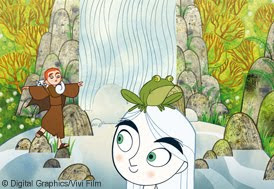 the brilliance of this movie lies in its power to weave folklore and history together in rich colors and celtic sounds. in its 75 minutes runtime, it is able to highlight the importance of ancient manuscripts, and the value of the art of illustration in relation to the preservation of culture and society.
somewhere among the rich hues of colors and the varying shapes and strokes of lines, you can sense the rich themes of bravery, religion, paganism, anger, love, loyalty, and pride.

visit the movie’s website: http://www.thesecretofkells.com/
and learn more by visiting the director’s blog: http://theblogofkells.blogspot.com/
-----------
the secret of kells (working title: brendan and the secret of kells)
2010
directed by
tomm moore
nora twomey