a good detective story/movie should at least give you the feeling of intelligence. you know, it’s that feeling that makes you feel smart after you have used your neurons to solve the mysteries of the case presented. it’s that feeling you get after the story or the movie have successfully guided you into the tiny clues and details and finally revealed to you the full view of the picture. perhaps it is that feeling that’s been lacking why i can’t seem to feel guy ritchie’s (snatch, rocknrolla) latest film adaptation of sir arthur conan doyle’s classic detective stories of sherlock holmes.

the humor between robert downey (sherlock holmes) and jude law (dr john watson) is present, the desaturated and high contrast colors of the film is there to give you the grimy, dirty, and dark old english atmosphere, the holmes-watson bromance is there, the not so femme fatale rachel mc adams (irene adler) is also there, but the high level of mystery and the escalating suspense that should have drawn you to the climax is foggy.

i don’t know exactly, but in some levels, the movie feels like it is taking you in many different directions with various rapid change of pace (much like the camera work in the film) without really knowing exactly where it is going to take you. at one point, you see rapid moving images and then it suddenly stops, and then it goes fast again, and then it does the matrix slow-mo effects, and then you wonder what the hell is happening again?


the movie is ok, but it could have been better. i blame this feeling to the screenplay draft that i got somewhere from the internet months before it was released in cinemas. that draft where lord blackwood is portrayed to be scarier and darker with lots of cult followers and where horses submerged in huge tanks are used instead of pigs to generate the chemical formula for the explosives that could blow the queen and the whole british parliament into pieces, is more exciting and interesting than what has been shown on the movie. i got more excitement and suspense reading the screenplay draft rather than watching the film. in the screenplay draft, the detailed figh scene among holmes, blackwood and irene adler is much more interesting than the battle that ensued in the film after blackwood’s plans have been foiled.

but despite the soporific air that i experienced from watching the film, it reminded me of one thing: that like holmes, you can always use the power of your deductive reasoning to dig out the solutions to the mysteries that lie in front of you. 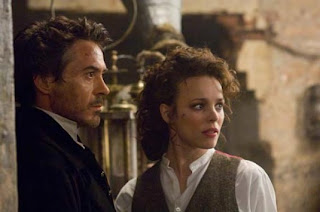 hey, ease up on the uptight-y-ness will you, contract "you have" to "you've", "it is" to "it's" or whatever, it makes you sound stuck up, and it's pretty offputting, makes me not want to read the whole thing.

"a good detective story/movie should at least give you the feeling of intelligence. you know, it’s that feeling that makes you feel smart after you have used your neurons to solve the mysteries of the case presented."

uh yeah, and the whole paragraph that sentence comes with, it's horrible, I'm sorry...

your writing is incredibly uncomfortable to read. just wanted to let you know.

thank you very much for your constructive criticism. i appreciate it very much.

using contractions the whole time does not make the sentences "more" readable at all.

for the record, i never intend to sound intellectual. it's bullshit to use words when you cannot use them properly. i know that. thank you very much.

sorry, but i write not to provide comfort or any other form of pleasure to you or to any other anonymous trolls and grammar nazis out there.

if only you could have provided a more objective and detailed explanation regarding the horrid status of my paragraphs and sentences, maybe i could have respected you more despite your lack of that simple act of politeness by leaving your goddamn name on your comment.

I can afford to be anonymous, call it "impolite" or "cowardly" I don't really care, it's the internet. you put yourself in that position, open to criticism.

come on, just think for one bit, how exactly would my name be relevant in this convo?

contractions, that wasn't my point, I never said that it'd make it "more readable" or whatever, I said it was offputting, it MAKES ME NOT WANT TO READ it. okay I thought, maybe it was just me that found it as offputting, maybe I was just a bit too critical, then I read the whole thing again, and God, contracting are the least of your problems.

for one, you seem to confuse "was" with "has been". y'know what, I'll save myself the trouble of recounting all of your mistakes and just tell you that you have to work on your grammar, man.

and that whole paragraph I was talking about. I'm incredibly serious when it comes to films, really, I love 'em, I commend you for writing these reviews, I actually see it as inspiration, I wanna write reviews but I just can't seem to get my thoughts together after watching one, so yea anyway, my point, my whole problem with it isn't really in the technical aspect, I've always stood by the principle that movies are made to make you feel something great, grand, an emotion, and I just don't see "smart" or this "feeling of intelligence" you were talking about as an emotion, "should at least give you the feeling of intelligence. you know, it’s that feeling that makes you feel smart", I just don't get that, why would you rely on a movie to make you feel smart.

now, being "smart" is sometimes a prerequisite for some movies, I mean let's face it, there are dumb movies for dumb people (i.e. Transformers) so there are bound to be smart movies for smart people, BUT I resent that whole idea, I hate it when intelligence is factored in when it comes to enjoying a movie, all you need is a keen eye and your undivided attention, I'm sure anyone could put two and two together and get it. prime example being No Country for Old Men (2007).

so yea, that's what I hate about that whole thing you said about it making you feel "smart" or "intelligent" or whatever.

oh and uh Robert Downey Jr. is my most favorite actor ever, so I'm taking your review on Sherlock Holmes, even though I haven't seen it yet, a tad too personally.