dakota fanning’s presence among movers, pushers, sniffers, watchers, bleeders, shadows and other individuals with superpowers in the chaos-filled hong-kong backdrop is the only reason that pushed me to watch push till the closing credits.

fanning, who now resemble some features of the olsen twins, shines in this a la jumper film. she wears her pink highlights well just like she played the character of cassie holmes, one of the watchers in the movie- those who can see and draw the future. 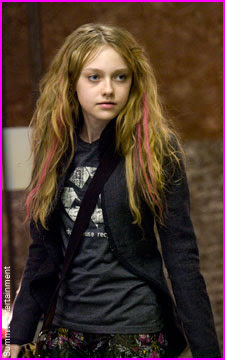 fanning on the movie push, watch her get drunk. uber cute this lil grown-up girl.
put her in front of a rust-embraced accordion door, on top of a low staircase decorated with veins of cracks, or in the midst of the traffic of people at an east-asian public market and you get a picture perfect shot. crowned with golden curls, her street-smart style in skimpy skirt, tight shirts and dark colored nails provided great contrast with the colors and the atmosphere of her surroundings.

yes, i am a dakota fanning fan. my fandom started since she played the character of the adorable little girl lucy diamond dawson in the movie iam sam. as if having quite a number of movies and acting nominations at a young age and providing the voices for stitch and coraline are not enough, fanning continues to deliver great performances on screen. she is a natural. thanks to push, i’ve seen a different dakota fanning that’s more edgy, stunning and mature.

as for the movie, the effects are not to die for. the plot about certain number of individuals who acquired powers from their nazi-experimented ancestors fighting for their survival is ok, but it nearly touched the 1st level of the excitement meter.
Posted by bulitas at 5:41 am

someday she will take drugs.

I haven not yet seen the film but I am a Dakota Fanning fan too.