attack of the grammar nazi 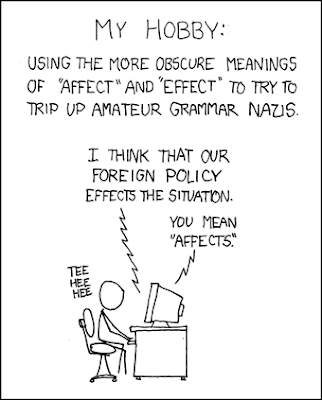 (“you are a graduate of up and yet you still have lots of grammatical errors? shame on you!”)
-sentence courtesy of the friend’s boyfriend.

apparently, my friend’s ego was heavily bruised by the boyfriend’s sentence.
it was as if their love and relationship are bounded by the laws of grammar, that a faulty parallelism, a misplaced modifier, a run-on sentence, a lapse in the subject-verb agreement, a distorted sentence pattern, and a misspelled word is a mortal sin.

for the record, i know many people from up who could not even construct a decent sentence.

friend flooded me with rain of rants via ym, occasionally throwing phrases of self-pity and despair.

i silenced the friend with “stop!” a one word sentence.

i told the friend to leave the judgmental grammar nazi boyfriend for personal peace but the friend would not listen.

the friend is about to finish the masters in media and cultural studies degree at a university in london and also works at abs-cbn as a reporter/correspondent.

the friend’s boyfriend is a philippine based veterinarian, almost ten years senior from my friend who also graduated from the university of the philippines.
Posted by bulitas at 7:44 am

the politics of good and bad grammar. one thing: people make mistake. it's up to them to correct it. it's called learning.

the grammar attack of my nazi boyfriend! argh! LOL Me and my boyfriend have these subtle debates about grammar...its never debatable right...? HAHAH!

as i usually say (in defense of a grammatically-challenged date): "who cares if he cant spell 'onomatopoeia'? he's smart enough to know that he likes me." chos.