park chan-wook wants his audience to see how things in this world can be viewed from various angles aside from that presented by the dominant power in the society. the irony of the titles of his vengeance trilogy (sympathy for mr vengeance, oldboy, sympathy for lady vengeance) invites us to look through the motives and stories that explains the actions of people who kill. some people are not really born hungry for violence and thirsty for blood. the cruel, misleading, judgmental societies created by men pushed and molded their characters for vengeance.
the director opens us to the stories of his characters to sympathize with their grief and anger, to realize how we could possibly execute even more morbid ways to satisfy our vendetta.

aside from the surprising twists of the plot, the good cinematography and the extraordinary gore and violence involved from the vengeance trilogy, the movie makes us think of what lengths are we willing to risk and sacrifice in order to get our vengeance from those who harm us and our loved ones. and should vengeance have been carried out, will it quench your thirst and satisfy your hunger or it will leave you craving for more? will the death of your nemesis serve as redemption for your acts? 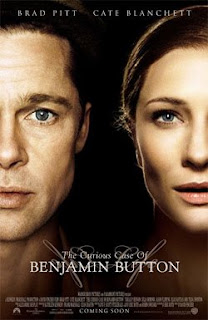 babies crawl, throw tantrums, seeks attention, needs support, and have very few memories. as we approach old age, our bodies, responding to the call of nature, will most probably decay. the power of our senses will be reduced, we will eventually crawl and need support, we will then throw tantrums, sooner or later, we will be like little kids who seek attention, and at the verge of the end, most of our memories might have been lost and scattered in time.

watch the curious case of benjamin button and witness the irony of life on screen, complete with the stunning performance of brad pitt, cate blanchett and taraji p. henson together with the rest of the cast. see the trailer, and you'll get the plot.

david fincher’s take on f. scott fitzgerald’s short story provides the audience a more graphic representation of the pains and the happiness of living life while aging backwards. indeed, most of the time, what happens at birth will most probably happen to us as we approach death.

kudos to all the screenwriters and eric roth for weaving a wonderful screenplay from f. scott fritzgerald’s short story. i like the addition of queenie and daisy’s character to the story. they added color and highlighted the life of benjamin, making it more colorful and memorable. the writers successfullly capitalized on the element of time carefully presenting its effects on the physical, emotional, mental and spiritual aspects of a person.

--------
you can read f scott fritzgerald’s short story of the curious case of benjamin button here
Posted by bulitas at 11:57 am

Ohhh. Forgive the ignorance but I had no idea Benjamin button was based on a short story.

I've been waiting for this to come out in the theatres since I first saw the trailer :D

Thanks for the link! I'm gonna read that short story now. :D

when i was a kid. i also had dementia.

when i saw the trailer of benjamin, i really couldnt help but to 'eeew.' i mean, creepy.