the soul of frank miller’s the spirit 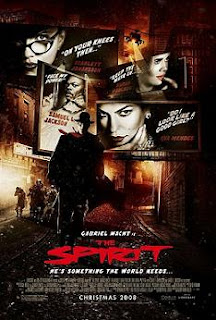 frank miler’s adaptation of will eisner's the spirit is a movie that requires you to watch the motion picture closely to discover that there are colors aside from the dominant black, white and red. it takes a while for the eyes to adapt to the desaturated colors of the film and appreciate the visual style, the stories, the themes, and the humor all scattered throughout the central city and all its characters.

it is a comic visual masterpiece that gives me the impression that i am watching a major sitcom production projected on the big screen. it is funny, and for that reason, aside from being a visual treat itself, i find the spirit highly entertaining. smart humors are all over the place. watching it reminds me of the good theatre actors and actresses in college where they do serious impromptu acts and improvisations but are all dead funny. those people don’t try hard to act or look funny. they are damn serious about their act, and that’s what makes them funny. same goes to the characters of the spirit.

denny colt (played by gabriel macht), who calls himself as the spirit, appears like the zorro of a toned down gotham city. he is the protagonist who possesses a bit of wolverine’s healing power, a bit of superman’s strength, a zorro mask, and a bit of the immortality of the vampires. he is supposed to be dead but thanks to the octopus (played by samuel jackson) and his experiments, he comes back to life and plays the role of the spirit, working on the side of the cops, getting the bad guys, protecting beautiful women, and solving criminal mysteries.

the spirit’s goal is to find answers to the purpose of his existence, while solving the mystery of the disappearance of a long lost flame, sand saref (played by eva mendes). throughout the story you will see how he solved the mysteries of the city, how he fights the octopus and how he manages to mesmerize all of the stunning ladies involved on the movie (hello scarlett johannson, eva mendes, paz vega, jaimie king, and kimberly cox ).

see, this is one movie that does not require much action from your neurons. plot is as simple. octopus, the antagonist, wants to possess god-like powers and immortality-all five syllables of it by drinking the blood of heracles that can be found on the one of the chests lying below the river bed. unfortunately, he ended up getting the chest containing the treasure of the argonauts which was then the target of sand saref. and as expected, ms saref got the blood instead of the treasure. there goes your conflict. and as for the spirit, aside from solving personal issues and petty crimes on the side, he has to face and prevent the octopus from drinking the blood of heracles to create chaos and to dominate the world.

i am no will eisner hardcore comic fan who brought as less expectation that i can bring to the movie house. less expectations lead you to the road less travelled by critiques and hard core fans. it is the road which often brings excitement and fun as you walk down its seemingly unfamiliar path.

come on, aren’t comics supposed to be, err, comic? (ok that was lame)
as for me, the spirit is a pretty visually satisfying movie- great graphics, pretty babes. this is no sin city, just like what mr miller said from his interviews. this is a different one, so shrug off that sin city hangover of yours so you could enjoy this flick. the soul of this movie lies on its humor, and on its visual style. never mind the characters that much. despite being almost 2 dimensional, you’ll find them lovable and funny, only desaturated.

and oh, before i forget, eva mendes is such a classic stunner.

“there's this one scene where she walks straight from the 1940s. she's such a fantasy character from the end.”
–miller from his april 2008 interview with entertainment weekly
Posted by bulitas at 1:26 am