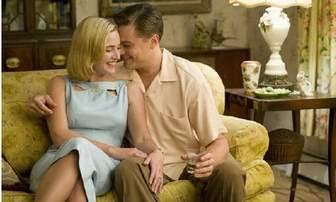 the road to revolution is full of quicksands and blackholes. if you plan to take the path of change, you better make sure that you are more than a hundred percent prepared in all aspects of your being-mental, emotional, physical, social, physiological, spiritual, moral.

the movie adaptation of richard yate's 1961 novel, revolutionary road, shows how most people cope if they fail to go against the system they wanted to change- they succumb to the system, to the norms, and to their society with either bitterness or numbness in their hearts while acting as if everything is ok.

when frank (leonardo di caprio) and april (kate winslet) wheeler’s plan to move out to start a new life in paris was foiled because of frank’s issues and lack of personal will to take concrete actions, their family crumbled. each of the characters developed a facade to comply with the norms of their society in order to project an ideal image of happy and successful individuals despite the fact that they’re actually not. what a tragedy.

in this era where disillusion often dominates the air we breathe, change is not achieved by merely wanting it. individuals should have the will to change and should also have enough guts to take risks. since deviating against the established norms comes with a package of opposition and rejection, the individual who plans change must be prepared to be mocked, to be hurt and to be crucified by the society.

only john givings (michael shannon), the schizophrenic, successfully deviated from the system when he saw the bullshits of his society. unfortunately, he was institutionalized and was branded lunatic.

a deep sense of will, fueled with passion and commitment added with concrete plans and actions are the essentials if you plan to travel the revolutionary road.

I think I meant it more as an indictment of American life in the 1950s. Because during the Fifties there was a general lust for conformity all over this country, by no means only in the suburbs — a kind of blind, desperate clinging to safety and security at any price, as exemplified politically in the Eisenhower administration and the Joe McCarthy witchhunts. Anyway, a great many Americans were deeply disturbed by all that — felt it to be an outright betrayal of our best and bravest revolutionary spirit — and that was the spirit I tried to embody in the character of April Wheeler. I meant the title to suggest that the revolutionary road of 1776 had come to something very much like a dead end in the Fifties.

the detailed explanation of the title's subtext. dewitt henry and geoffrey clark's interview with yates for the winter, 1972 issue of ploughshare
Posted by bulitas at 8:56 pm

I have a copy of Revo Road, but I haven't gotten to watching it yet. Is it true Kate is Sam Mendes' girlfriend?

I heard kate is married to sam mendesand that they already have a child.
=)