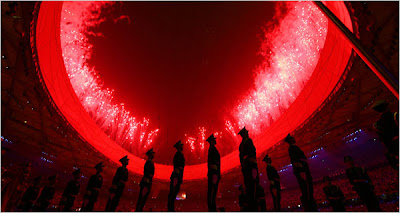 if there is one great thing that the latest olympic opening ceremony has proven to the modern world, it is the fact that man's reach truly exceeds his imagination. the spectacular presentation of the opening ceremony directed by famous film director, zhang yimou, whose films were once banned in China, tells the world to dream big and to make it happen. everything is possible. with today's technological advancements coupled with the talents, the discipline and the diverse cultures of the people, a grand show like the 2008 beijing summer olmpics opening ceremony is possible.

hays..i was able to watch the live telecast of the opening ceremonies last night and it just blew me away! the ancient culture of china and the future collided in one single event! i was blown away! brilliant!