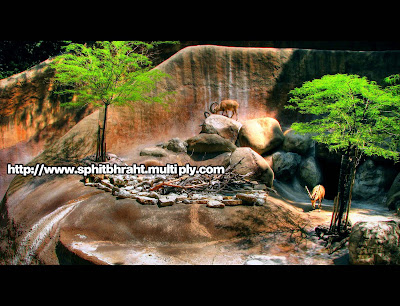 after several attempts of bribery and coercion, i finally convinced my sister to come with me to the zoo. she tagged along our cousin who was at her age so i ended up traveling with two young girls, all giggly and perky, and fully dressed up for the day.

the bus trip planner said that it would take 2 hours from our place to reach the zoo.

zoo opens at 10 so i dragged my pals to the bus stop before 8.

spirits of excitement and perkiness possessed the girls. they bobbed their heads in sync with the songs playing on their ipods, they took pictures of themselves and they giggled with their own girly-teeny-bopper jokes, not until they learned that we have to walk a few miles uphill to reach the zoo.

originally, the bus was supposed to bring us directly in front of the zoo gates but the family marathon –for-a-cause created a roadblock and forced us to get to the zoo.

we did seek help from other people along the way, but we still get the same instruction. “go aaaaaaaaaaaaaall the waaaaaaaaay up!”

and so we went up the hill, trudged the steep road for vehicles, and got a huge amount of sun bath.

in the midst of the complaints, the rants and the sporadic pauses of my girls (one of them wore slippers, the other wore flat shoes, then some loose blouse on top) due to sweat, dirt and hopelessness of finding a zoo along the way, we passed by a community of people that came from the marathon. they have food, drinks and spare shirts. my girls were furious with me. we have already walked for 35 minutes coated with dirt, pollens and desperation to reach the goddamn zoo.

we passed by this group of people busy doing make-ups and fixing huge cameras. there was this pretty girl entertaining the folks around but i was a bit tired to look closely at her face so i went straight inside the area, heading straight aaaaaaaaaaaal the waaaaaaaaaay up. then another pretty girl, wearing a production id called our attention and asked us to leave the premises immediately. apparently, they were doing a shoot for who knows what. but what surprised me was the sudden revival of my sister’s energy after we were shoved off the area. “kuya! di ba si dayanara torres yun? wah!”

i gave the girl a second glance and oh! it really was dayanara. too bad i felt the calling of the zoo was more important than taking paparazzi photos of her.

fifty minutes have gone and still there was no sign of a zoo. my sister and my cousin were throwing piercing glances at me and were pushing me that we just go home, that they were tired, and sweaty and thirsty. so i summoned all the remaining ounces of hope in my system and convinced them to walk some more. i just knew the zoo was near. and lo! after 15 more minutes! we have seen the oasis in the desert of hopelessness-the zoo!

it was a fleeting moment of bliss. “di ansarap ng feeling pag pinaghirapan?” (“doesn’t it feel great when you earn something through hard work?”) i told my girls, and they just replied with sighs and asked me to buy them water.

i was excited to see the animals, but it turned out that most of them were bored and do not give a damn about my excitement. the lions were dead asleep. the leopards were immobile on the tree. the bears hid in their caves, and the most of the other animals were tamed by the sun’s offensive heat.

so we just roam around, tried to wake up some animals by screaming at them, took some pictures, and heard some crazy remarks from the other zoo visitors.

it was funny how most parents simplify things inside the zoo for their children. for instance, when some children asked for a certain animal, you could hear parents saying, “oh it’s a goat”, “it’s a pig”, “it’s a cow”,” it’s a bird”, instead of reading the animal’s name posted on the fence.

one kid asked her mom, “mom, what animal is that?”

“those are goats, my dear.” said the mom when in fact the animals were called rams.

“oh my god! what an ugly creature! what was that?” said the woman

“it’s a bird” said the man beside her.

the bird was called the double wattled cassowary (casuarius casnarius). 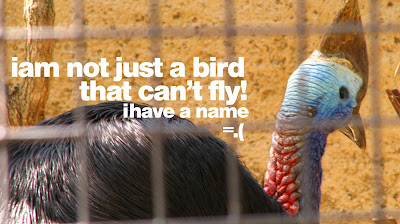 see how things get simplified inside the zoo?

when a certain child disliked the appearance of a creature, he blurted out

“so ugly! mom! will an alligator eat that up later?”

and surprisingly, the mom said yes.

there was fun inside the zoo. as the heat of the sun mellowed a bit, the animals slowly emerged from hibernation and started to show off their skills, talents, and their acts to the audience. the bears came out, the rhino emerged from his cave, the monkeys and the baboons became wild, and other animals finally went out to check the people.

although i only managed to get a few decent pictures of some of the animals, i felt happy that day simply because i was finally able to visit the zoo. from there i’ve learned that even the most wild of animals can be tamed in a controlled environment. even the wildest emotions, the wildest curiosities, and the wildest names can be simplified if we choose to. 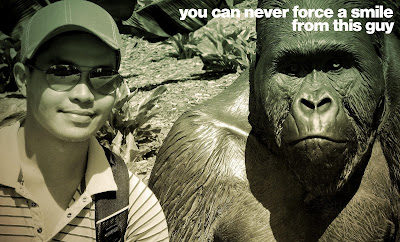 and oh, the new header image is from a lucky shot of a zebra couple from the zoo.

We used to have field trips to the zoo way back when I was in elementary. I was so sick of it. But with your post, I realized how much I missed the zoo. Hehe. :D

I am a mother and I tend to do the same thing.
My daughter was looking at a picture of dodo.
Since, we are on the basics -- birds, cats, dogs and stuff -- I would just tell her, "It's a bird."
Things are still that simple in her head.
Teaching and learning progress from that.