uninvited from the sands of time

there’s nothing grand and epic about my prince of persia experience but nonetheless, i enjoyed it. it was like the pirates of the carribean desert style. the oriental and western influences of the musical score made the chase and fight scenes more engaging. dastan (jake gyllenhaal) and tamina’s (gemma arterton) chemistry creates romantic and subtle sexual sparks that work. the graphics of course is for the win. this is a visual treat for kids and kids at heart.

aside from the unusual british english accent of the characters, what bothered me most is the resemblance in many levels of gemma arterton to that lady who raided and possessed my senses a few years ago. the eyes, the fair skin, the lips, the voice, that goddamn virginal voice that can be commanding at will, summons the memories of the long erased memory of that lady.

since i saw miss gemma from the latest clash of the titans movie as io the woman cursed with agelessness, boy i was stupefied. it was like the first time i saw that lady way back in college. all things seemed to stop and my vision zooms in to focus on her- the motions of her hair strands, the grace of her walk, the piercing threats of her eyes, and the deceiving semi-smile that will lure any curious heart to her trap.

although gemma artenton gave me a parade of unsolicited memories, i still like her. i like how her characters from clash of the titans and prince of persia died and then resurrected afterwards. i like the irony of her aura. she is one fine actress who can pull off a weak virginal damsel but can also be a fierce and sexy fighter at the same time. 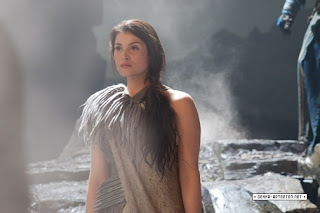 gemma arterton in clash of the titans 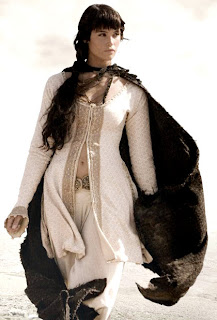 gemma arterton in prince of persia: the sands of time
Posted by bulitas at 1:25 pm