i swear, dad could’ve said "wtf" the moment he he saw my aura beaming with freshness but he restrained himself and blurted “mr t.?” instead.
a series of wtfs and who the hecks paraded on my mind afterwards. i just had my hair cut. that was all.

just this morning, our warehouse guy at the office greeted me with a mexican style “wasap ma niga?” slang. i gave him a do-i-look-like-a-niggah-to-you look but it turned out futile since the warehouse guy was already laughing his ass off to the shadows of the warehouse. he just saw my new hairstyle.

when the other boss asked if this hair was usually sported by filipinos, pinoy officemate answered “no. it’s the hair of the black people.”

for chrissakes, there’s too much stereotyping in the air it suffocates me. lol.

since when did a mohawk becomes an exclusive hairstyle of “black” people?

according to wikipedia, your fastest (though with questionable credibility) source of seemingly valid encyclopedic facts:

the mohawk hairstyle is named for, and often associated with, the people of the mohawk nation, an indigenous people of north america who originally inhabited the mohawk valley in upstate new york

there you go. mohawk does not find its roots from the “blacks.”

the following day, dad told me that my hairstyle could get me in trouble. he referred to my hair as the hair of the homeless, the troublemakers, the punks, the addicts, the hair of those bestowed with a dim future. riiight.

the mohawk (known as a "mohican" in british/commonwealth english) is a hairstyle. in the most common variety, both sides of the head are shaved leaving a strip of noticeably longer hair in the centre. mohawks became common in punk subculture in the early 1980s and were then adopted by rivetheads with various other groups, becoming more diverse in style. today, mohawks are still associated with the punk subculture, but have also become part of mainstream fashion.

let’s say i am just enjoying the fashion freedom in this city. besides, the mohawk i wear is not the one that screams for attention like the death hawk. mine looks more like a frohawk (afro hawk, thus the mr t association), like the one that puck (mark salling’s character) from the tv series glee wears.

no, i wasn’t bothered by the wtf reactions of the people around me. i can live with this hairstyle for weeks. i was just surprised about the initial reactions of people about the hairstyle associating it with blacks and other negative connotations without even exerting the slightest effort to research on the origin of the hairstyle. this just goes to show how quick we whip judgments based on other people’s physical attributes. the danger lies not on the hair itself that attracts attention or trouble, but on the compromised judgments of the actual characteristics of a person over their physical, immediate traits.

just for reference, my hair now looks something like this: 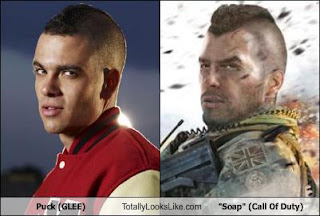