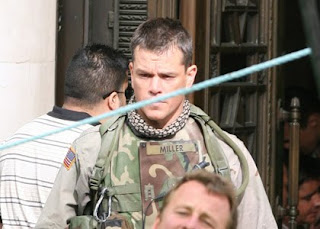 the fast-paced action sequences pumped with high levels of adrenaline scenes of green zone will lead you to intersecting alleys of noise and dust filled iraq. it reeks the atmosphere of violence, corruption, conspiracies and disillusion.

in director paul greengrass’s greenzone, you will meet the diversified pool of people who loves to manufacture truths, people who loosely uses and distort the meanings of freedom and democracy, men who are hungry for power and prestige, people who will trade honor, loyalty, and pride over personal gains, people who are willing to risk the safety of the majority, and some people who questions the status quo and are brave enough to seek the answers by themselves.

watching matt damon as chief warrant officer roy miller chasing the action as he seeks answers regarding the weapons of mass destruction on the warzones of 2003 iraq is like watching jason charles bourne in iraq.

as you watch the film, you will discover how many of the characters presented are disillusioned with the idea that their actions can make the world a better place. there are people who act and pose as heroes but when you look deeper into their personas, you will realize that their acts may contradict with your morals and ideals regarding heroic and noble deeds. some characters from the movie deliberately act upon the machiavellian principle of “the end justify the means.” because of this, the movie’s appeal becomes limited to audiences who love war movies and to those who appreciate conspiracy theories and explosions.

director greengrass sure knows how to take you into the midst of all the action and explosions.

"credited as having been 'inspired' by the non-fiction 2006 book imperial life in the emerald city by journalist rajiv chandrasekaran
Posted by bulitas at 6:07 am

thanks for this, bulitas! :)