i was never really aware of the presence of hired professional downsizers until i saw jason reitman’s up in the air (2009). the film is about ryan bingham (george clooney), a man whose profession is to travel around different workplaces in the united states to conduct employee layoffs in behalf of bosses who lack the balls to do the job. he is also a motivational speaker on the side. he delivers speeches using the “what’s in your backpack?” theme to relate his philosophy of a life independent of relationships with people and things. his main goal is to achieve ten million frequent flyer miles as soon as possible.

ryan’s life philosophies and ideologies are challenged he when meets alex (vera farmiga) and natalie (anna kendrick). alex is another frequent flyer like ryan who is witty and charming as him. he soon develops a casual relationship with her that eventually leads to something deeper. natalie, on the otherhand is ryan’s new officemate. fresh grad, top of the class, ambitious, and suggests that their company remains grounded (as opposed to flying around the country) and just conduct layoffs over the internet. in that way, the company could cut more than 85% of the costs of their expenses.

through the course of the film, the development among these characters’ relationships is explored through a series of frames filled with verbal and non-verbal signs. the ryan-alex flirting and the blooming of their casual relationship is a perfect romantic comedy segway. meanwhile, watching ryan and natalie argue and learn from each other’s move is like watching a graceful fencing match. all the actors played their part well.

george clooney was so into his character that as an audience, you can easily sympathize with him, possibly relating with his inner views as you delve deeper into the film and its themes. he is such a natural that his charm never wears off until the closing credits roll. vera farmiga matches clooney well in this film. she is both mesmerizing and teasing. her non-verbal gestures helps a lot in the development of her romance with clooney and it also makes her character look more natural. anna kendrick’s portrayal of the subtle geek who slowly learns the trade of their line of work, is also commendable.

i enjoyed up in the air. it gave me a familiar sense of warmth that came from the concocted emotions of sadness, happiness, and sudden loneliness perhaps brought by the multi-layered themes explored in the movie. no, i know this is not that kind of warm feeling that springs after watching a feel good flick.

i also love how the mope rock music interjections set the mood for the scenes and enhance the overall movie experience.

the movie makes you think as you watch. somehow, it brings you into a realm of deeper introspection. it makes you look deep into your soul and ask yourself what it is that you really want in your life. will you end up like ryan bingham’s character? are you like the frequent flyer alex? are you by any chance like the topnotch fresh grad natalie?

this movie explores many avenues of the human persona. it leaves many doors open, many questions unanswered, and keeps you wondering even after the closing credits fade. 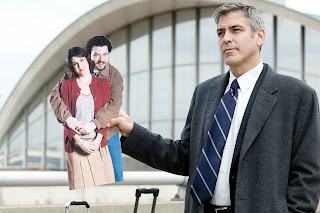 another must watch... do you think it will win the Oscar this year?