the tale of the albino grinch who ruined the christmas lunch

once upon a not so distant christmas time, sister, sister’s boyfriend, dad and me decided to have a lunch on a steak house that bears the name of a popular brazillian dance and musical genre on its doors.

the place was painted with the color of chestnuts. on a pale afternoon, the place looks like it was glowing with blood, pale blood. it was huge. well, any place minus the crowd gives you the illusion of space. as i suspected, aside from us, no other hungry soul dared to enter their premises yet.

we were greeted by an albino wearing a set of well trimmed brows. he led us at the table over the corner of the room near the windows. dad was all giddy and fidgety. his word of mouth the whole time was “steak, steak.” he roamed around the room, to the bar, then to the counter where the vegetable salad and all the other kitchen displays were placed. the albino, now with a raised brow darted him with suspecting looks.

the albino guy handed us the menu. it was plain, very plenty selection. dad ordered the eat all you can set of steaks. the works; eat whatever meat you can type of meal. sister and boyfriend got themselves burger and fries. i ordered barbecue baby back ribs. 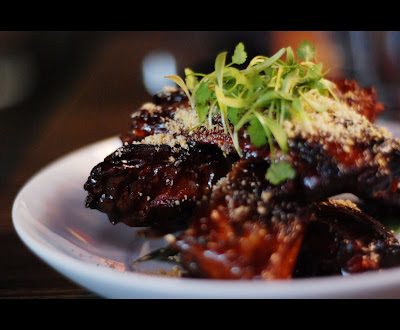 after minutes of camwhoring and laughing, the meal arrived one by one. first the burger and fries, then the rice, then the ribs, and lastly the beans and rice for my dad’s eat all you can meat. the other server brought a huge beef meat that hugs a huge metal rod. the other server asked dad how much meat he wants and placed slices of beef to his plate.

we ate in peace. we ate just to suffice the immediate hunger that bites in our stomach despite the fact that the food was anything but ordinary. i swear i can cook a better tasting version of their food at home. perhaps to celebrate the spirit of christmas and to have us taste the slices of meat that he was eating, dad offered to share his beef, his pork and what have you from his plate. we were eating in peace. not until the stiff albino with semi-raised eyebrow approached our table and announced in a matter-of-fact voice “did you know there is no sharing of food here? no sharing ok? you get that? you understand? no sharing!”

ok, i get it, some restaurants do have a certain rule about food sharing and it was modestly written on their menu or it was written somewhere where hungry generous customers can see. but that goddamn place doesn’t have any sign regarding food sharing anywhere. it was ok to remind us, customers about their house rules. but can they be more polite? no wonder they don’t get a lot of customers in that place. most restaurants with no sharing policy are the posh ones who target the upper classes of the society. they are strict about their policy but they are modest not to exercise a surprise announcement at their customers in the midst of their meals.

that killed my appetite. he ruined it. i gave up on my ribs and shot him with a mocking stare. i saw him and his cohorts checking up on us while we were eating. they were trying their best to elongate their necks like pathetic baby giraffes trying spying on us when they were only a few steps away. pathetic.

how uneasy was that? why the hell do they make their customers feel uncomfortable?
i told my dad the men in white are eyeing us. he said he saw them. i am pretty sure he lost his appetite as well. i told them to abandon the food. i called the albino person, still with raised brows, and asked for the bill. he asked me if we needed anything else. the meat guy approached us and asked if dad needs more meat. dad said no thanks. half-eaten meals rest on our table when the bill arrived. i told my sister i don’t have to give the albino waiter the manny pacquiao imma-punch-you-in-the-face hey-i-have-money look. he doesn’t deserve it.

we surmised that his attitude springs from the fact that he was working during the holidays and that he doesn’t have sex for years and that he was a person deprived of love and meat since he was a child. huhlolz. a dollar tip is enough for him and his eyebrows.

just my two cents, seriously, these restos posing as a posh place for the upperclass people should at least train their staff to be more polite. 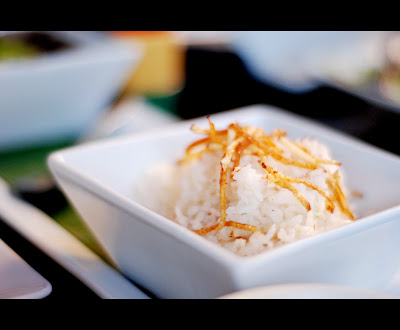