it’s complicated, so smile and just deal with it

it’s complicated is probably one of the best romantic comedies that you can watch early in the morning to kick off your day. it does not make you feel dumb, it is witty, it is charming, plus it comes with great acting.

you can never go wrong with meryl streep. i don’t know, but the more i watch meryl streep films, the more i get to have a crush on her. alec baldwin on the other hand acts his age and is effective in this movie as the ex-husband who still finds affection over his ex wife. steve martin’s portrayal of his character as the divorced architect who falls for streep is endearing as his smile despite the hurts that he is experiencing. 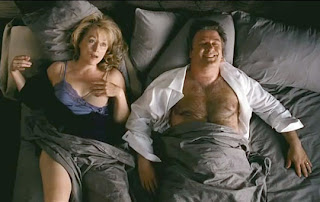 the plot is simple, divored couple jane adler (meryl streep) and jake adler (alec baldwin) are living and moving on with their lives as individuals; jane manages her bakery and remains single, while jake is married to the younger agness with her son pedro. things get tangled up when jane and jake find themselves together in a bar in a new york hotel room. they are there to attend the graduation ceremony of their son luke. they drink, laugh, talk, dance and make love like one happy married couple.

jane and jake keep seeing each other for days, enjoying each other’s company and trying to figure out if they can still work out as a couple. but despite the positive results of their secret affair (better sex, happier dispositions in life, positive work attitude), jane still feels weird being the woman of her ex-husband.
things appear more complicated when jane spends more time with adam schaffer (steve martin), jane’s architect who patiently reads all her 47 emails and is helping her build her dream kitchen and house extensions.

i love how the movie handles the complexities of life presented on the film. the decisions the characters make and their matured approach on how they should deal with the situations make it all look simple. yes, it is complicated, but somehow they find ways to make it appear simple. perhaps it is because of their acceptance that life, love and people are as fluid and as dynamic as the ever changing random weather patterns of the world. i think avril lavigne’s song complicated can be a good choice to top off the film. but then i guess that could spell redundancy in some levels. lol

nancy meyer’s it’s complicated is one feel-good movie that is good to watch and relax on a fine saturday morning.
Posted by bulitas at 1:36 am