a tryst of grace with death on chris martinez’s 100 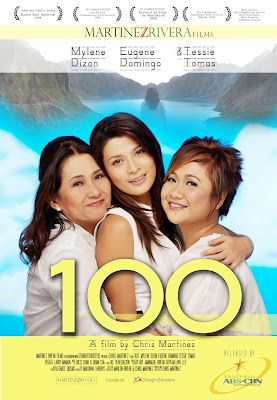 there are hundreds of things to do on my list but which should be accomplished first? given the premise that each passing second that ticks in our life is another step closer to death, which will prioritize before you meet death right smack in the face?

the character of joyce (mylene dizon) reminds us to review our bucket list (the list of things that we want to do before we die or let’s put it this way, the things we want to do while we live) in preparation to death’s often unannounced visit.

in the movie 100, joyce is one of those lucky individuals who have been given the chance and the opportunity to put things into order days before her rendezvous with death. her knowledge about her sickness allows her to sort things with herself, with her family, and with her friends.

despite its fame, death has been one of the most eluded and feared topics since the existence of mankind. the association of death with fear, evil and the dark forces of this universe can be attributed to most people’s perspectives regarding it. incomplete bucket lists, shattered hopes, unfulfilled dreams, the birth of the what could have beens, the spring of regrets- most of these things happen because of death. that is according to most people i know who have seen and experienced death among their friends and families.

upon joyce’s journey towards the date of her death, we can see how she was able to reconcile the issues of her past, the dilemmas of her present and the stability of the future of the people around her.

chris martinez’s 100 is a spiritual comedy that tickles the soul. isn’t this is a movie about death? isn’t it supposed to be sad and gloomy as you witness how the character deals with her remaining days on earth, fulfilling her 100 things to do on post-its? it is sad, actually, but the brilliance of the script and the genius of the acting of mylene dizon and eugene domingo makes me smile and laugh during the most unexpected scenes.

one of the most poignant and bittersweet scenes of the movie is when joyce and ruby (eugene domingo) visits the grounds of their gradeschool to reminisce the past. the lingering memories of the fun times of the yesteryears in contrast to the present never fails to summon a smile coupled with a slight pinch at the heart.

contrary to what a friend remarks about the simplicity of the film, i think the element of simplicity works. the simplicity of the movie, which the friend thinks is at par with mmk (maalaala mo kaya) episodes, works in such a way that it moves me in different levels, and it has inspired me to want to face death with grace like joyce.

the friend argues that indie films are supposed to be different, or gay, or something way out of the ordinary. 100 is just too ordinary for him, given the simple topic of death and dealing with it. i am no film expert, but for me, the difference between indie and mainstream is their scope in terms of distribution and audience. the effectiveness of the film lies on its power to at least trigger something within the audience. it doesn’t necessary have to be a positive feeling, but as long as the film has acted as a catalyst of change, encouraging chemical reactions to the body and possibly pushing neurons into exercise, it is effective.

the final scene, where the audience can see the camera panning and fading on joyce overlooking to her family in a tranquil state is this film's scene for the win.

joyce’s life is the climax itself. the whole film, each act of fulfilling her post-its is a gracefully executed step by step denouement to her demise.
Posted by bulitas at 4:13 pm

i love this film. makes you think the kind of hell your life has been na kailangan mong bawaiin.

people fear what they fail to understand...

i must see this.