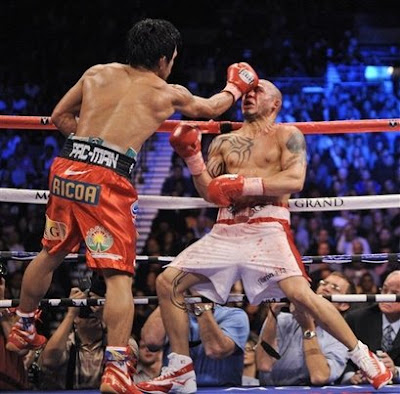 dad was out to watch the fight with his newly found friends. sister went with her look-alike friend’s house to witness the match in live action. i was left alone at home, cooked dinner, and heard the booming speakers of the mexican neighbor’s hd tv broacasting the pacquiao-cotto fight live.

i heard the rocky theme song being played for pacquiao. i guessed it was the intro part for each fighter.

the exhaust of the kitchen stove and the defective fire alarm drowns the sound of the fight.

cheers from the speakers dominated the airwaves.

i hear filipinos shhouting manny! manny! on the background.

round 8 the mexican neighbors’ loud “yeah!” “go!” and “ah!” defetaed the sound from the tv speakers.

wow. those neighbors are also rooting for manny.

round 8 .11 secs left, i found a streaming a live site online. the channel is in spanish. but who cares. i muted my computer’s audio and relied on the neighbors power speakers.

cheers from the neighbors.

manny! manny! from the crowd on tv.

back at the computer, i saw the distorted, blood-smeared face of cotto.

i joined the “yeah!” and “go manny!” and shouted in unison with the crowd.

round 12. more cheers from the neighbors. i chanted “go manny! go manny!” all by myself.

commentators verified the victory of manny.

then the sound of the super speakers of the neighbors deadened.

i just heard and witnessed another historical event.

congratulations manny pacquiao for being the 1st boxer to win 7 world titles in different weight divisions.

Your blog keeps getting better and better! Your older articles are not as good as newer ones you have a lot more creativity and originality now keep it up!