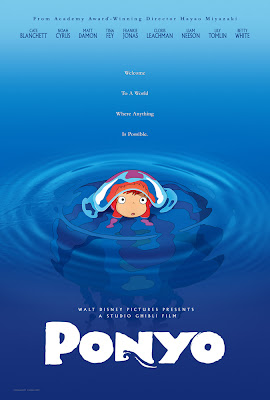 ponyo reminds me of the philippine mythical creature undin. she’s small, she comes from the sea and travels on land, and she finds her way to humans. at this point, you are most welcome to veer your thoughts away from the undin of the shake, rattle and roll movie. that’s plain scary. ponyo may look scary from the start, but she is cute-scary. add to that the fact that she is created, written and directed by renowned animator/director hayao miyazake (princess mononoke, howl’s moving castle, spirited away).

according to this latest studio ghibli movie- ponyo (崖の上のポニョ gake no ue no ponyo, literally "ponyo on the cliff"), ponyo is a mermaid goldfish (but isn’t she pink?) with a human face. her real name is supposed to be polumisharudin but sosuke, the kid who rescued her after being stranded from a fishing town near the cliff baptized her the name ponyo.

my initial impression with ponyo is that she is this one intrusive little creature who falls in love with the boy who feeds her ham. ponyo’s father, who appears to take care of the order of some creatures underwater, looks like the front man of a disbanded rock group. her mother is the sea, the goddess, the female with pink hair who can change her form by will. 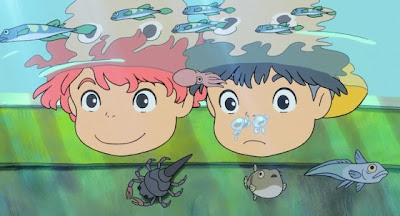 ponyo could have been one of the simplest studio ghibli film by plot and by animation, but i think it also have potential to be one of the most heartwarming, disturbing and piercing film among others. the story is simple, ponyo falls in love and did everything, even surrendering her powers and her privileges as a mermaid to become a human girl and be with sosuke, the boy she loves.

ponyo’s story reminds me of a discourse i had with a college professor whom i think is actually a cupid in disguise as the wicked witch of the west. i remember what she told me that day, “do you really love her? if you do really love her, you should have gone with her. you would not mind the traffic, the time, and the efforts. if you really love her, you must be willing to do everything for her.” and with that, i was able to see love in its purest, unadulterated state.