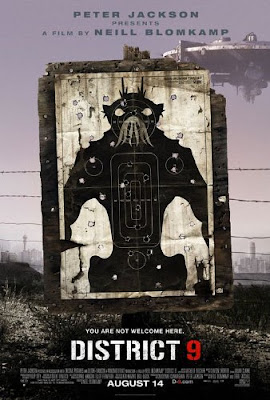 perhaps one reason why most people i know sided with the aliens of district 9 is that in one way or another, each of us feels like one of them aliens- alienated, misinterpreted, discriminated, persecuted.

director neill blomkamp and producer peter jackson’s district 9 is the sci-fi movie of all the sci-fi movies of this year. it steams brilliance and boasts a fluid, visual technical entertainment.

the movie is actually more than the piles and rubbles of alien and man’s dirt and violence. this movie possesses a heart.

i think what made the character wikus van de merwe effective is his transformation. he starts at the film as the mnu (multinational united) field operative agent that shoots bullets of annoyance through the air. he pisses the aliens, he pisses other humans, he pissed me off. but as the story unfolds, we see wikus van de merwe slowly change as the alien dna merges into his. his blood, his veins, his way of thinking, his senses and his whole human body is slowly becoming alien. imagine experiencing empathy in the most tragic way.

it is only when he acquired some alien characteristics that he realizes and understands the side of the aliens. wikus van de merwe generates sympathy from the audience because he becomes the alienated human, the misunderstood one, the discriminated, the pursued and the one to be persecuted.

how he manages to resolve the tension between his human and alien side is one of the best parts of the movie for me.

District 9 is a mesh of documentary-style and special effects, and to see young audiences sitting next to me enjoying the terrifying treat amazes me. The film is a bit 'horrory' for an age of 14 or 15. I, myself, am shocked by the visuals of District 9. It has a highly developed aesthetics that deserve academic study, whatever the inconsistencies present in its form, for example, the surveillance footage style, if remember it completely, have some shot/reverse shots effects. Who could find a surveillance camera with such high cinematography???