king is clown and clown is king 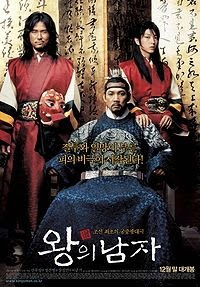 gore, violence, repression and tyranny are the marks of king yeonsan’s rule. what the king wants, the king gets. he would not mind chopping off your fingers of your head should you oppose his ways.

since escape, change and opposition are foreign from the people, the hope of changing the ways and thinking of the king is a farfetched idea until a group of street performers manage to capture the king’s heart with the art of their performances.

king yeonsan fancies the eunuch clown gonggil (lee jun ki) who possesses the charm and beauty that shines brighter than the whores and concubines of the kingdom. the king constantly summons the clown to entertain him with stories and mini puppet shows. without realizing it, the clown is able to summon the other side of the king’s persona. behind the decorated palace walls and doors, the king cries, smiles, laughs, plays, grieves and acts more human with the clown than he is with his subjects.

when the tyrant king yeonsan starts showing affection towards the court clown after being entertained by his several performances, i thought, wow! look how art can change the adamant heart of that king.

the movie shows how the art of the street performers enables them to survive life with all its trials in front of them. in most parts of the film, jangsaeng (gam wu-seong) the other clown, and gonggil use their skills in the performing arts to deliver their message of resistance against the oppression of the king.
art, in the movie, is used to move feelings, to stir tides of emotions, and to remind yourself of who you really are in times of blindness and desperation.

in most parts the king acts like a clown when he makes a fool of himself which is evident upon his decisions. the clown on the otherhand, becomes more like the king, by pawning the heart of the ruler of the kingdom through his art and his charm.

in the story, the king does not love the clown, he lusts him and he needs him to comfort him. for me, jangsaeng, the other clown, loves (although very subtly implied) gonggil. will his willingness to sacrifice his life, and his pride to salvage gonggil not count as pure love (if there is such a thing)?

the king and the clown (2005, south korea) is a dolorous and sweet tale of souls who stay true to themselves and their art even in the face of death.
Posted by bulitas at 6:42 am