permanent residence, naked with a jacket (2009) 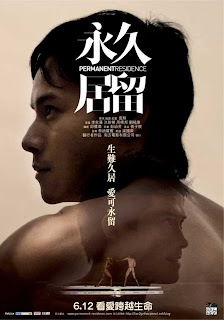 windson (osman hung chi kit) from danny cheng wan cheung aka scud’s movie permanent residence (2009) is the “straight” guy who likes setting things straight. he made his outlook about many things linear by allowing his peripheral vision to be covered by the laws and the dominant ideologies of his society. he is the person who keeps saying he is “straight” therefore he cannot do certain things that the not so straight people wanted him to do. he doesn’t need to be forced. he is straight, therefore his love is limited to the line of friendship when it comes to the same sex. nothing more, nothing less. bromance is a different category though. but love? as in love love? don’t even ask him about it.

ivan (sean li jia hao) on the otherhand is the person who likes to contemplate about life, death and the essence of his existence. he was able to conquer his childhood fear of darkness as well as his insecurities. he developed his physique to avoid the sissy label. he is one of the topnotch employees from his computer company. his character is presented as the responsible type, the modest one, the achiever, the emerging one, the minority who can soon conquer the majority, and the lover.

although the evolution and the declaration of ivan’s sexuality isn’t that clearly established, (he acts “straight,” he looks “straight,” and given that his basic definition of being gay is having sex with a man) he willingly subscribed to the society’s label of “gay” perhaps to make things easier. no more questions, no more intrigues, just a straight answer, a sexual preference under a certain category. yeah, he also likes setting things straight.

ivan’s openness and honesty when he confessed his feelings to windson is like his act of stripping his clothes off without inhibition. but because of windson’s disposition, their feelings as well as their relationship will never cross the “straight” line. although at many times, windson has been a very accommodating friend, somehow returning ivan’s affection, by carefully balancing on the friend and the love line.

permanent residence is a bold movie that challenges many established aspects of the status quo. it challenges one’s view on sexuality, love, dedication, family, life and death. why do some people die first than others? why can’t straight people learn or allow themselves to be flexible? how far can you go for the person who resides in your heart? can you sacrifice your sexuality for love? is love ever gender bias? is it ever possible for a “straight” person to love a “gay” person? does love make you less of a person? (in windson’s case, a lesser man) where does the straight line end and where does the gay line start? these and many other questions hover throughout the film as you delve deeper into the lives of the characters.

it stirs controversy as it was dubbed as the most nudity-explicit hong kong movie made. on the film, expect to see the full nakedness (full front and back body exposures) of the characters on most scenes. but although the characters were stripped most of the time, the camera angles, and the cinematography made it look decent. it doesn’t look porn, it doesn’t appear offensive. after watching them for a while, your eyes and your senses will get accustomed to what you see, and you will eventually look into them as normal people with clothes. yes, their skin being their clothes, for you will soon see and discover that the absence of actual clothes does not mean an instant openness to the world. there is a lot going on deeper in the skin of the characters. they may be naked, but you can sense that they are clothed in layered jackets of internal conflicts and repressed emotions.

the characters’ physical nakedness provides a perfect contrast to the backdrop of the walls of emotional repressions, the tides of internal conflicts and the towers of social constructs.

most frames from the movie (especially the ones from the start) can pose for a beautiful postcard still. the cinematography is ok, showing a balanced mix of vast spaces where the eye can wonder and tight places that heightens tension.

the actors delivered a fair and acceptable performance that is enough to make you believe in the sparks of chemistry between them. windson clearly likes ivan. ivan declares his affection for windson openly. but if only windson could have set his mind straight, and if he only knew how to prioritize things according to their value, tragedy may never pay them a visit.

this movie is a sensual treat that borders on the philosophical and the metaphysical.
Posted by bulitas at 2:19 am

okay this is new...i'll give it a try. honestly, sayo ako kumukuha ng movies na magandang panoorin...i mean i wouldn't have watched 'úp in the air'if it wasn't for your previous post...and it's good. really good. i like kendrick;s character...

woots!
thanks lucas for reading and always dropping by.


kendrick's character from up in the air is charming no? although ang geeky niya minsan.