2012 and the new world from the chinese arks 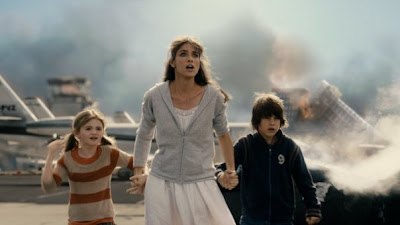 extra large solar flare eruptions disturb the solar system that sends heat waves of epic proportions. This causes the earth’s core to boil, steaming the birth of chaos and havoc to mankind. tremors occupy the earth as tumbles and rips in many directions. tectonic plates and continents moves as titanic tsunamis invade the planet. somehow, somewhere, in the midst of all the apocalyptic scenarios, a family (together with thousands of other people) struggles to survive as they inch their way to the mountains of china where the world powers have secretly built modern arks that are supposed to save the world should another great deluge pays the world a visit. no, this is not the exact mayan prediction about the apocalypse of 2012, these scenarios are from ronald emmerich’s sci-fi movie 2012.

i almost doze off during the first quarter of the movie. thandie newton used to excite me but she bores me from the very first frame that i see her till the closing credits roll. it is a struggle to keep an eye open. drinking non-stop from the extra large soda cup does not help. i have to keep stuffing my mouth with popcorn to keep my facial muscles busy, hoping that doing so could help bring back my attention to the movie.

and then i saw john cusack and family’s car evading and racing through the chaos-punched streets of los angeles. the visuals are actually good. that hooks back my focus on the film. the whole scene where you see buildings and cars crashing, the roads ripping, trees uprooting, and just everything tumbling up and down the metropolis is like a good amusement park ride. yeah, it could pass as one of those computer generated visual rollercoaster like the simpson’s ride at universal studios hollywood.

there is a general theme in apocalyptic films like these that shows the various reactions of mankind in times of hardcore extreme trouble. people will do anything to survive, even if it takes to kill, even if it entails sacrifice.

the movie is a miss and can be chaotic in many levels, but its focus on certain family values like sacrifice and love salvages it from the rubbles and oceans of apocalyptic debris.
Posted by bulitas at 4:25 am

i haven't watched the film yet... im such a loser. hahaha!