m ordered another bucket of beer after narrating the tragedy of his 8-year odyssey with h for the nth time. he said they were destined by fate as a couple. they were steady as the foundations of the pyramids of egypt, they were inseparable as siamese twins, and they were in love like there’s no tomorrow. they were about to be married the following month when h met some random guy in some random place. she said she fell in love, and with that, things start to fall apart between them.

for weeks, m hoped to drown beneath the abyss of beer carrying the hope that somehow, somewhere, he could fathom the logic behind h’s sudden change of heart. i told the old officemate m that there is no logic behind h’s decision. some people, whether consciously or subconsciously, work and live under the universe’s principle of randomness. and doing so makes them an enigma to others. they will always be that puzzle with a missing piece hanging on the cobwebs of your mind.

the non-linear plot and storytelling of (500) days of summer reminded me of m and h’s what-could-have-been romance. scott neustadter and michael h. weber’s screenplay revolves in spiral unpredictable motions around the lives of summer finn (zooey deschannel) and tom hanson (joseph gordon-levitt) and how randomness and chance work into their relationship.

summer is the random girl, tom is the expectant guy. the couple is the perfect example for m and h. they both look good together. deschannel and gordon-levitt are both stunners with eyes that convey depth.

just like the story of m and h, summer did something that caught tom off-guard.
things became hazy between them when tom’s expectations swallowed him whole.
because of that, summer is and will always be the enigma for tom.

it took a lot of time drowning, wallowing and swimming under oceans of liquor, work and stress before tom finally snapped back to the reality.

some people, whether consciously or subconsciously, work and live under the universe’s principle of randomness. you will never know what could happen next to all of the things in this world that you cannot directly control.

my frequent advice to friends- value and enjoy each of your relationship with the people you love by the day. carpe diem. in whatever you do, act as if there’s no tomorrow. love as if the next second will be your last. because when you love, time is irrelevant. it does not matter how many seconds, minutes, hours, days, or years you spend with one another. what matters is the quality of your relationship together.

watch (500) days of summer and you will see what i am talking about. 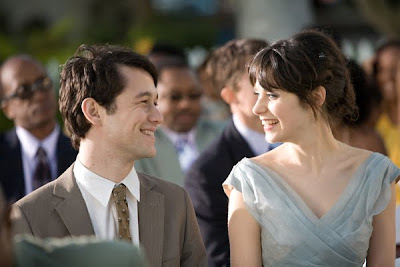 so, to give you a glimpse of the movie, here are the lyrics of a track from the movie's soundtrack:

this is a story of boy meets girl.

the boy, tom hanson of margate, new jersey,
grew up believing that he'd never truly be happy
until the day he met "the one."
this belief stemmed from early exposure to sad british pop music
and a total misreading of the movie 'the graduate'.

the girl, summer finn of chennicok, michigan,
did not share this belief.
since the disintegration of her parents' marriage,
she'd only loved two things;
the first was her long, dark hair.
the second was how easily she could cut it off,
and feel nothing.

tom meets summer on january eighth.
he knows, almost immediately, she is who he's been searching for.

this is a story of boy meets girl,
but you should know upfront...
this is not a love story.

wow... i coudn't imagine how she could just trash away the those 8 years. but i guess it's how some things go. Feelings do change, and sadly for your friend, h didn't commit as much as he is.