a new world from the scientist’s soul 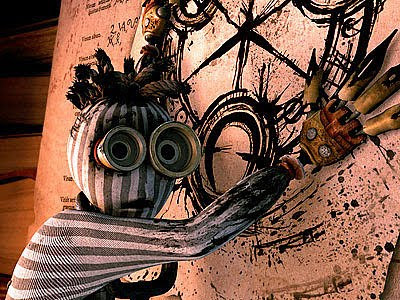 set in the post apocalyptic world devoid of humanity and soul, the movie 9 is about a group of sentient ragdolls created by the scientist who seems to be the last human on earth, struggles to fight for their survival against the catbeast and the fabrication machine.

this machine that happens to be an initial product of the human desire to create a better world order turns out to be a weapon of mass destruction after the intervention of greed, pride and power. eventually, this machine and its kinds have devastated the world and wiped out the existence of almost every human in the planet. in the movie, the catbeast machine made out of scraps and pieces of metals kidnaps 2 after he saved 9. later, 9 finds himself with the company of 1, 5, 6 and 8. 1, the eldest and the standing leader of the group forbids 9 to leave the place and explains the futility of saving 5 from the beast. he prioritizes safety rather than risking their lives to save 5. but since 9 is the more adventurous, no-fear type of creature, he encourages 5 to join him in his quest to save 5 by going down the lair of the catbeast.

the journey of 9 and 5 reminded me of frodo and sam’s journey to mordor. add to that the fact that 9 is voiced by elijah woods, the impulsive and clumsy hobbit from the lord of the rings movies. the two managed to save 5 by the help of the fighter ragdoll 7. the catbeast was defeated. they could have lived hapily ever after in their post apocalyptic world until the curiosity of 9 awakened the bigger antagonist of the story, the fabrication machine. this is the point where the real adventure begins. 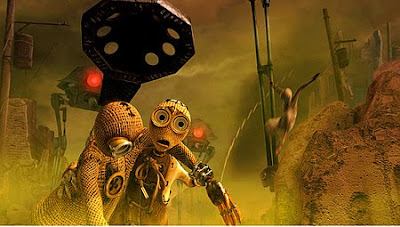 shane acker’s 9 made it to my list of favorite animated movies because of its stunning visual quality. the textures, the details, the colors, and the lighting are all perfect to set the mood of gloom for the film. the steam punk-like atmosphere adds not only an artistic flair but also a bad-ass aura to the whole film.

one thing that makes the movie more interesting is that it is a visionary of the what-could-have-beens of humanity. the author and director of this movie knows what he is doing. he knows how to put his visions into the frames of his animation.

the movie does not in any way pose to be a philosophical or complicated. the plot is simple, and the characters’ goal is clear-to survive. the overall narrative may not be as complex many expects, but that does not in any way strip the movie of its message. the movie shows how one human soul can be split into many parts, each with unique personalities and traits. (each of the ragdolls’ souls is a part of the scientists’ soul.) it shows the conflicts of the soul- the oppositions among survival, fear, courage, safety, and pride. 9 tells us that if we choose to, we could always redeem ourselves from the shadows of our past actions. it tells us that no matter how bleak, gloomy and hopeless the world may seem, there will always be a way to survive and that the hope of a better tomorrow can actually happen.

9 is based from shane acker’s 2005 animated film of the same title. it was nominated to the academy awards best animated short film last 2006.

you can watch the animated short here.
Posted by bulitas at 4:39 am

i so envy you!!!! where do you get to find these good movies?

Hey! I just wish to give an enormous thumbs up for the nice information you
may have right here on this post. I will probably be coming back to your weblog for more soon.