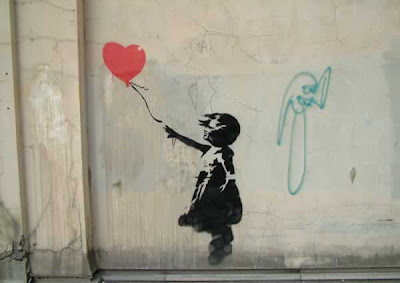 bansky wall art
balloons do not appeal to bale’s senses as much as books, music, toys or movies do. to bale, a balloon is just one part of the vast cosmos. he recognizes its significance to the whole universe, although he thinks the impact of a balloon to his life is relatively light years away. he thinks about things this way. aside from those things close to his heart, everything else seems irrelevant and trivial. this is bale’s life- not until he encounters the first red balloon that makes his heart beat with explosive lub-dubs in dolby digital surround.

for others, the balloon may seem like another balloon that makes up the vast cosmos of their existence, but to bale, it is even more significant than his books, music, toys or movies.

he met the balloon in a dark alleyway opposite ignoland when his heart and mind are both under the cumulonimbus clouds of desperation and fear. the balloon string wrapped itself to his wrists the moment it touched his skin giving him something to hold. since then, he never lets go of the string.

time proves that the balloon does not only provide an excellent company, but also serves as friend to bale.

it does not take long before love develops between bale and the balloon. the company of the balloon brings security and calm to bale. the hand of bale offers guidance and companionship to the balloon.

one should take note that at the beginning of their relationship, the balloon flies at par with the height of bale standing upright. but as the intensity of bale’s love for the balloon increases, his desire to raise the balloon to the pedestal up above the clouds becomes stronger.

for a fleeting moment bale feels happiness embracing him.

he still holds the balloon string in his hand. he can still see the balloon dancing with the wind up in the sky, red, dominant, happy.

at a certain point when bale could not contain the air of love in his system, that he wanted to huff and puff it again to the balloon, he realizes that the balloon has gone too high that even pulling it down with the string in his hand will do no good.

the red balloon that now appeals more to his senses than books, toys, music and movies is now way beyond his reach.

the wind often forces him to let go of the string but his mind and his heart is adamant to hold it tight.

now, bale walks around and contents himself blowing his breath of love to the wind hoping it may touch and reach the balloon.

bale is happy and contented with no regrets whatsoever for putting the balloon up above the pedestal in the clouds. at least he still has his balloon. despite what happened, bale smiles for he knows that the balloon would still move back down to him in the future when it runs out of air.
Posted by bulitas at 6:18 am

very cute story, but with depth and creatively written :)

i could relate to bale. as long as the string is there, connecting the two of them, there's nothing to worry about.