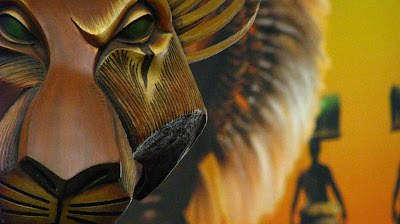 the moment elephants, zebras, baboons, white birds, giraffes, hippos, leopards, ostriches, and other animals grace the aisles of the theatre to fill the stage with the lions and the lionesses’ celebration of the birth of simba, i instantly died. but then the call of rafiki and the sounds of the bongos, the orchestra, the percussion, and the live voices of the choir from the pride rock slowly brought life back into my senses to witness the unfolding of a broadway musical production that is conceived from great and detailed artistry, unparalleled musical talents, colors, vision and story.

now i have more than enough reasons to love julie taymor for directing lion king the musical and putting the life and the magic of the african savannah on stage. yes, this production eclipses my so-so reaction against ms taymor’s seemingly beatles mtv remake montage movie, across the universe.

ms taymor and her creative team’s genius craftsmanship are responsible for the detailed costumes and the elaborate set of the production. the lightweight masks and the costumes used, showcasing the mixed influences of local african culture and the disney character features, are designed to not hide the human being. they call it the double event. in every mask, the audience sees both the mask’s static expression as well as the actor’s dynamic changing face. hell yeah it works; though the eyes needs to adapt immediately to all the minute and moving details on stage. it is on this musical where i see mufasa and simba with itak-like swords a la african tribal warriors. beat that!

aside from the story (that most of us are already familiar with), the music of elton john and tim rice (present in the original disney film) plus some additional songs and chants make the production more memorable and heartfelt. hardcore lion king fans will always be familiar with the songs despite some minor modifications from the original movie score. just for the record, my familiarity with most of the songs are hinged on the first ever cassette tape i bought in my life- the lion king original motion picture soundtrack.

the huge moving props and set of the stage and the ever changing backdrops and the technical wonders of the light have brought me in a nearly theatre-production-nirvana state. magical and spectacular are understatements for this production. my senses are caught off-guard. it suddenly dawns to me how i miss theatre productions. the chills i feel sends my eyes to the verge of tears.

witnessing the production, now on its 11th year run, is monumental for me. i remember telling myself and my friends before how i could die right after i see this production. so i died. but then i was born again to thank the universe for the opportunity of seeing simba with swords. rawr!


if you are patient enough, you can rummage for the segmented clips of the musical on youtube.
Posted by bulitas at 4:58 pm

I can find the sword of Simba? Do i need eyeglass?