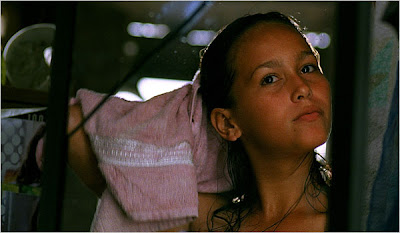 remarked a, my sister’s american guy.

“kuya! this is our first movie date!”

“you did not even consider what a would feel and think about this.”

my sister snapped and walked ahead of me towards the entrance of the movie house.

of course i did. i wanted to see their reactions and defamiliarize them at the same time. besides, i also wanted a to see a glimpse of life in the philippines. i gave the couple the freedom to choose which movie they wanted see but indecision rules over them so i bought them tickets to serbis.
i am sure mr mendoza also considered what his audience will say and think about his opus. the thing is, he had his goals. and whether it is to defamiliarize, to play with the senses, or to present one of the many sides of the philippine society, he did it on purpose.

in this era of make believe where people would rather see and accept the more pleasant (usually fabricated) alternatives than what is actually happening in their environment- poverty, hunger, exploitation, prostitution, struggle, serbis have the least chance to get the general nods of approval from its audience.
the movie is not just about nanay flor (gina pareño) who struggles to save her family from crumbling down while dealing with her personal plight regarding her unfaithful husband. no, it is not only about nayda (jacklyn jose),the second matron-in-charge who manages her family, the family theatre, her regrets, her lust for her cousin, and her regrets for not pursuing her post graduate career. it’s not just about coco martin (alan), the artist who cleans and paints the walls of the family theatre. no, it is not only about merly (mercedes cabral) who frequents the family theatre and was impregnated by alan posing an additional member to the family. it is not only about the kid who, despite seeing the flaws of his environment, continues to enjoy his youth with optimism. and no, serbis is not about jewel, the girl who utters i love you in full flesh in front of the mirror.
it is about the family being the microcosm of the society.
serbis is about sustaining the family- keeping hold of its crumbling foundations, unclogging its clogged drainage, treating the peeling skin of its walls clothed in graffiti, cleaning its grime filled crevices, providing light on its dark alley ways, refreshing its stinky atmosphere that stings the olfactory nerves, protecting its windows susceptible to all sorts of cacophony from the streets, guarding its entrance that is vulnerable to attack and invasion, and guiding its members who often gets lost in the labyrinth of their personal issues.
unlike what most critiques have said, serbis is not as obscene and shocking as i thought it would be. perhaps the noise, the sex scenes, the dirt, and the darkness are not at all strange for me. i have heard more deafening noises, have seen more obscene sex on screen, and have experienced even darker scenarios.
filipinos who expressed their disgust over the film by saying that it only capitalizes on the negative aspects of the life in the philippines (poverty, dirt, noise, prostitution, corrruption) failed to watch the film closely. they must have left the theatre early upon the sight of alan’s boil on his ass.

serbis challenges the audience to see the beauty amidst the filth, to appreciate even the faintest light coming from the old projector inside the dark realm of the dilapidating movie house named family and to listen closely to the conversations embedded deep within the soundtrack of the streets.
it harbors feelings of guilt to those who felt pleasure against the paradigm of their morals beliefs. it elicits the feeling of disgust to those who felt that their standards for beauty and aesthetics were violated. it evokes the sense of familiarity to those who can relate to the scenes and situations. it provides a temporary pleasure that satiates the hunger of those who wanted to see something beyond hollywood. 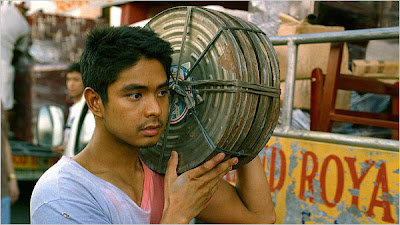 i guess the exodus of alan at the end of the movie reflects what most of us do when faced with conflicts and truths.

it’s sad that serbis is not widely distributed in moviehouses at the philippines. the film is best watched in a moviehouse where you, as the audience sits comfy in your chair, eating buttered popcorns with your favorite soda on the side, would watch a similar moviehouse only dirtier, probably stinkier, darker and steamier.

with j. jose and g. pareño in the cast, no wonder this film is a must watch.