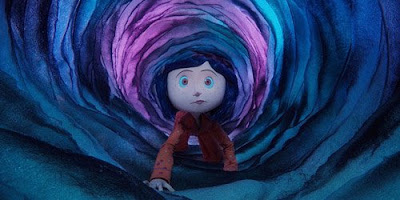 young coraline jones (take note, according to the movie it is ko-ra-layn not ko-ra-lin) reminded me of my pre-teen years when i used to wish for new, if not, better parents.

the thought of the existence of the parallel universe, where things could have been better was brought to life by the genius of writer-director henry selick and novelist neil gaiman together with their whole production staff and crew of talented people.

coraline is dark; dark and sweet as the ghirardelli dark chocolates that take away my daily stress, and it is even darker and sweeter in 3d!
yes, seeing coralline on 3d and wearing those geeky, almost emo glasses makes the viewing experience a whole lot better.

coraline is alive. somewhere beneath the placid waters of our subconsciousness lies a small coralline in all of us, wanting, and secretly wishing the existence of another universe, a parallel place where things could have been different, regardless of whatever consequence comes in exchange.

this is more of an adult movie. my dad liked it. must be the 3d effects, but he loved the humor and the dark story of coraline. hours before the movie, he mocked me for dragging him into the movie house to watch an animation. "cartoons? hah. kids stuff again. you're still a kid, i knew it." yes, dad loved the movie. but i am not sure about the kids who used to be so jumpy and perky and noisy that you can feel their high level of excitement creep into your nerves.

coraline is one dark, witty movie that tells us to appreciate and make the most of what we have. it does not tell you to shut up and be contented of your present situation but to be an explorer, and seek what you think will be the best for you. just like coraline, we do have choices. we could choose to conquer and live the most of this universe or we could try and go to the small door at the wall and see the parallel universe which could pose a seemingly better alternative.

----
the stop motion animation technique used in coraline is superb making it look 3d even on regular cinemas, though seeing it with 3d glasses is 10 times more awesome.

read the text here and listen to the soundtrack here.

wow... another great review from you!

hindi ako familiar dito but i'm taking your word for it :)

Waiiiit. Where did you watch it?

I'm hoping they show it in an iMax theatre here!

@lucas: do try to see it when they show it there! it willbe worth your time!