the timely waltz with bashir

the stories of my dad during his war missions in mindanao, in east timor and in liberia pioneered the painting of the ugly portraits of war on the canvass of my mind.
women and children clamoring for help, people shooting each other in the head, civilian bombings- nothing new, you may say, for these were scenarios that we often encounter on the media.
world war 1 and 2 is over but the world is still at war. great parts of the world are still at war with each other. the pictures of war, according to the stories of my dad, no matter how cliche the suffering and the tragedy may appear to us because of the images and the stories presented by the tv, the papers, the radio and the internet, is traumatic, morbid and ruthless especially if you experience it. 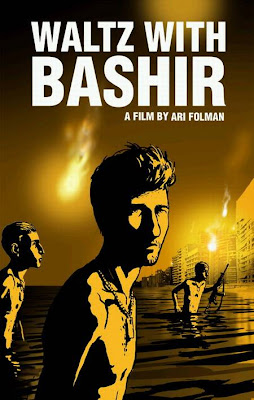 ari folman’s animated documentary, waltz with bashir is a timely movie that painted vivid and surreal portraits of war. the movie follows the story of the character of the israeli ari folman, in search of his lost memories of the his involvement with his nation’s war and invasion of lebanon in 1982. his quest was triggered on the night of his discourse with a friend who is constantly haunted by a dream about dogs who keep on chasing him, trying to devour him. ari then embarks on a journey to recollect his memories of the past by visiting people also involved with the war. from there the audience is treated with a compelling visual masterpiece that shows the gore, the surrealism, the perversion, and the pointlessness of war.

art director polonsky and chief animator yoni goodman together with the whole staff did a great job in executing this one of a kind animation. i love how the dark, seemingly rotoscoped images complemented the mood and the tone of the film. this is one movie that takes you deep into the heart of action and then will slowly bring you to rest to prepare you for bigger surprises. i nearly slept near the end of the film where a man being interviewed kept on talking with his monotonous voice. i tried to keep my eyes open to keep track of the subtitles. that last 10 minutes of the movie almost lulled me to sleep oblivious of the next scenes that would pose a great shock to the senses.
i recommend you to watch this film should you get the chance. i bet dvds will be out real soon. 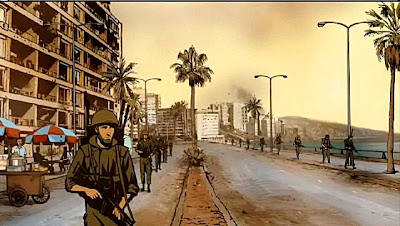 after watching the movie, my friend renee and i encountered a group of demonstrators most probably protesting against the united state’s support of israel’s attacks against gaza and condemning the war and violence happening at the middle east. this opened our discussion about the wars and all of its shits.
Posted by bulitas at 1:51 am

Man, I wanted to watch this movie too. But all the theaters that are close by me doesn't show this.