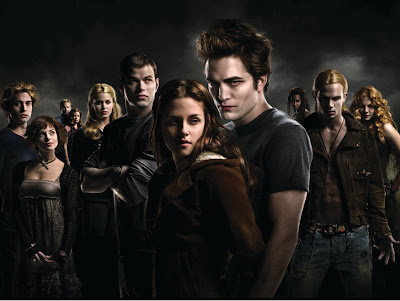 the post-rain gloom atmosphere of the twilight movie reminds me of that time in my childhood when my chest would swell up in protest against the rain. just like the rain, the movie somehow managed to send large amounts of soporific air to the unarmed audience, stripped from any twilight fanatic immunity armor, and sends them to the doors of sleepyland. but thanks to the ultra high decibel screams of the hard core teeny-bopper fans, my senses were salvaged from the land of sleep and was brought back to the movie. ok, seriously now, the movie was visually appealing, but overall, it was just, err.

i don’t hate it and i don’t love it. that’s what bothers me a bit. aside from the guest appearance of the philippine flag at the school canteen scene with bella and edward, plus the cameo appearance of the twilight series author stephenie mayer, and the original motion picture soundtrack, there’s nothing else to rave about the movie. that’s just me, hardcore twilight folks.

i love the soundtrack. it’s one bright idea to put paramore, muse, mutemath, the black ghosts, linkin park and other great artists on the list. paramore’s decode, linkin park’s leave out all the rest, the black ghost’s full moon, iron & wine’s flightless bird, american mouth, mutemath’s spotlight are my favorites so far. do get a copy if you can. at least there’s an audio treat to compensate the post-rain gloomy atmosphere from the movie.

It's StephEnie Meyer. I know because for some reason, her weird extension of the male version of the name bothered me a bit. Hahaha. :P

I think I want to watch the movie myself to see how bad it can really get. :D

i'm very particular with musical scoring and sountrack when watching a movie...paramore's rocking with 'decode' astig!

@Jewel: oh thanks bout that. =) so it's stephenie LOL

Ahem. I'd rather read a Sylvia Plath or a Nora Ephron than Twilight. Haha. I'm harsh.

I did hear that the soundtrack was good. But the movie? I don't think Im gonna spend to watch it. I will just wait for the online run. he he

"aside from the guest appearance of the philippine flag at the school canteen scene with bella and edward" >>>astig ah! bakit kaya may philippine flag?

If you are interested, kindly mail back at teamcasino[at]dcemail[dot]com, indicating your blog for reference, and I'll send you back pricing details, guidelines and processes. Looking forward to doing business with you.

your blog rocks. you write so well and take pictures perfectly. I linked you in my blog.its pretty new and I hope you can visit some time soon. have a good one.

the soundtrack was the only damn good thing i love about twilight. the movie was a waste of my time and money. bloghop!