a pause on nick and norah's infinite playlist 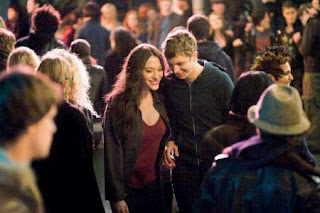 just like the abused bubble gum that travelled across the mouths of caroline, the public restroom toilet bowl, norah, and nick, the movie gradually lose its flavor and sweetness as the story approaches the break of dawn.

much of lorene scafaria’s` screenplay deviated from the novel’s plot maybe to suit the actors and actresses playing the roles. rachel cohn and david levithan’s teen novel of the same title delves a little deeper into the lives and psyche of the characters of the story which makes them more lovable and the sparks of romance more believable.

in the novel, the authors open you to nick and norah’s thoughts, making you see what they see, feel what they feel and hear what they hear. the novel is presented in chapters alternating the first person perspectives of nick and norah (chapter 1 being nick’s chapter, 2 being norah’s and so on) that will somehow give you the impression of reading their exchange of thoughts. in the movie, however, it is more straightforward that the depth of the characters’ lives and personas are compromised.

norah is this smartass high school girl who loves and knows much about music, loves the band where’s fluffy and considers herself frigid and not as pretty as the other girls. she likes to devour oreo cookies. caroline is her bestfriend since childhood who is much outgoing and more adventurous than her. nick is this 6 footer something bassist and the only straight guy in their queercore band who is dumped by his ex-girlfriend tris. tris is also a childhood friend and schoolmate of norah and caroline who was described in the novel as someone who tries to squeeze in herself with norah and caroline.

in the movie, tris was portrayed as a total bitch: showing signs of promiscuousness, being a brat who apparently still wants to win nick’s affection despite the fact that she had her new guy with her. in the book, she is not a hardcore mean girl. it was explained that she left nick because she could not reciprocate nick’s feelings for her and that she only wants nick to move on with his life even though she could have hurt him. she even confronted norah and gave her some personal advice about nick and taught her some kinky stuff about giving him a pleasurable kiss.
just like the character of tris, the movie could have brought more life to caroline, and to tal, norah’s ex-jewish boyfriend.

okay, maybe i expected much from the movie, since i have read the book months ago before the movie hits the big screen. but but but there are just some notable differences. just like what i said, the romance between the main characters could have been more intensified. i don’t know if providing wittier lines for the actors would help a lot, but many scenes that could have given the audience a more romantic teeny bopper sparkly moments that were in the novel were taken for granted. (ie the early morning walk from the streets of new york, the make-out near a vending machine/ice machine, the role of the salvatore jacket in the development of their romance, the stroll and chat at the park)

big thanks to kat dennings and michael cera’s chemistry and charm on screen while throwing their witty lines at each other, the movie kept me on my seat till the closing credits. i expected more conversations about music, though. i also expected the movie to be more charming and effective since i could finally hear some of the songs that nick and norah talk about in their conversations in the novel, but i only heard snippets of some of the cool songs featured in the soundtrack.

overall, the movie is a fun ride, though with less excitement, pounding of the heart and romantic sparks.
Posted by bulitas at 2:50 am

Wow, nakita mo na to? Want to see this one too.

there were some awkward moments in this movie that were hard to get past... such as every time that gum was passed around (yuck!)

@jayclops see it. it's quite a good movie to watch on a weekend.
=)

@movie fan: i know. i felt that those bubble gum scenes did not do anything to elevate the air o romance or the level of humor in the story. it was just off.