the mummy's journey to the shang-ri la 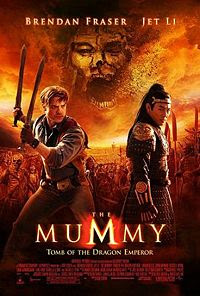 taking it from the context of the latest the mummy movie (tomb of the dragon emperor), i’d say one of the goals of the movies made in our generation is to reach the shang-ri la; that is to go to this utopian place where one can drink from the fountain of life and gain immortality. most movies are geared towards that goal.

in one way or another, movies (especially those in installments) project the need to be immortal, to be classic, to transcend time and to influence generations of audience. most movies (in my opinion) like the lord of the rings, star wars, the matrix, and the first three installments of indiana jones have showed signs of immortality since their premiere on the silver screen. aside from the box office success, those movies have established the solid marks of its elements to the world; the interesting and engaging plot, the semiotics embedded in the frames, the moral and social values, the technicalities, the sound, the actors and actresses, everything. almost every aspect of the production contribute to the overall success of those films that may have successfully drank the water from the fountain of immortality at the shang-ri la.

unfortunately not everyone made it to the shang-ri la. the latest the mummy installment, the tomb of the dragon emperor, failed to complete the journey, and stumbled along the avalanche of the underdeveloped love angles, the bland acting of the main characters and the predictable cliché plot.

the visuals are great, but they are not enough to salvage the whole movie. the jet-li and michelle yeoh brief fight sequences did not help as well. it was as if the movie is trying to mummify itself to achieve immortality, but the cast, the plot and the love angle stripped the movie of its possible immortality. it is like brendan fraser bringing a mummy to life and then destroying it afterwards.

maybe i just missed the fun and the excitement of the previous mummy movies. though there’s not much to rave about the first two as this one. i miss rachel weisz, and patricia velasquez as anck-su-namun (the hot egyptian princess).

actually, the trailer was better than the movie.
Posted by bulitas at 1:04 pm

Patricia Velasquez is hot. The fight scene between Rachel Weisz and Patricia SCORCHIN! awwwwww! I have yet to see this and based on your review, I shouldn't expect much. pfffft.

hays...gusto pa naman panoorin..this is one of the two blog that tells the same thing...the movie sucked...crap...thanks for posting, mate!