i saw this on the news this morning while watching the replay of tv patrol on tfc. director brillante "dante" mendoza’s movie, serbis is competing at the 61st cannes international film festival. i do hope i could see this movie soon. ms gina pareño’s presence on screen gives me a weird sense of joy. 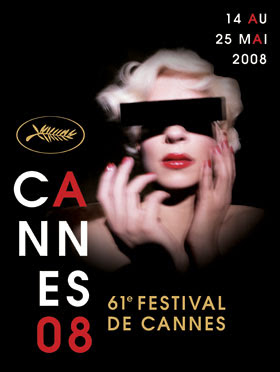 the poster of the festival de cannes 2008 is a photograph by david lynch, adapted by pierre collier, a cinema poster artist.

“Serbis is the story of a family living in a rundown movie house in Angeles City, Pampanga. Gina Pareño plays the matriarch who owns the moviehouse, while her family members serve as her employees. Playing Gina's children are multi-awarded actress Jaclyn Jose, former action star Dan Alvaro, and newcomer Roxanne Jordan. Julio Diaz plays Jaclyn's husband, while Kristofer King is cast as the projectionist of the movie house and Coco Martin is a painter. Mercedes Cabral plays Coco's girlfriend and Bobby Jerome Go plays the son of Jaclyn and Julio.” –philippine entertainment portal

"The Competition section is the toughest section to crack. This is only the third time that the Philippines has been invited to this section in Cannes: the first time in 1980 with the late National Artist Lino Brocka's Jaguar and the second in 1984 with Kapit sa Patalim, also by Brocka. The screenplay for Jaguar was written by respected artists Ricky Lee and Jose "Pete" Lacaba; with Lacaba getting solo screenplay credits for Bayan Ko: Kapit sa Patalim." –philippine entertainment portal

another shining moment for pinoys. the same way i felt proud of charlie green and madonna decena (despite the uber sentimentality) for their respective sterling performance on britain's got (PINOY) talent.

i just wish they would this run the film among local cinemas soon. i love gina parreño and jackilyn jose so much!

@tagabukid: yeah. it is so good to feel rpoud about our fellow pinoys! hehe! asteg! haha! apir! apir!

yeah,
I like Gina Pareño too. She's a great actress. quite versatile.
I hope they win this one.