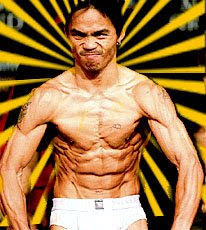 no other force has tamed the philippine islands like that of manny pacquiao.

streets and major roads breathe from the usual traffic jams, crime rates drop to zero, areas of conflicts experience ceasefires, communities unite under the same television set and most people take their breaks from work to witness pacquiao’s moments of pain and glory.

the few minutes of boxing rounds were almost like the holy week of the roman catholics; air of peace rules the atmosphere, people embark on exodus to their provinces, the religious flock their way to church, and the vehicles of edsa are swept to other parts of the country. but unlike the holy week, that is limited only to the roman catholics (pious and catholics at heart), pacquiao’s influence extends over people of various religious orientations, ethnicities and beliefs.

marimar may have thousands of followers, but she only roused the physical senses of her fans. willie could have influenced legions of audience but tito vic and joey also eats their share of the pie. mrs arroyo may have felt she possess the highest power in the nation, but she fails to reconcile, even for a day, the disputes of the islands. pacquiao, whenever he fights, ties together the 7,107 islands of the philippines in spirit and in hope.

no man has ever commanded the people to unite, even for just a few minutes, to hope and pray for him. no man has ever influenced advertisers to use his face, despite not being a model (with the usual face that appeals to the masses), to carry their brand. no man has been blessed with so much luck that after all the blows of controversies and the jabs of issues against him, he stood victorious.

and whether marquez says

"i don't like the decision...i still feel i am the champion. it was a bad decision. that first knockdown, he got me cold, but then i adjusted my game plan and i thought from then on, i dictated the whole fight. ... the people are the best judge, and the people are booing him. i won."

I agree with how Pacquiao can make Filipinos stop what they are doing and just watch TV. Sometimes I think we tend to get too biased for Pacquiao, and sometimes we are at fault for making him cocky at times. He's a talented boxer, we are very proud of him but it always pain me that other unsung people who did something for the country remain unsung.

you'd think marquez would be more civil than morales and barrera just coz, unlike the two, his cockiness is not well headlined.

If only Pacquiao could fight everyday so people in the country are united everyday. But that would be grueling for the guy. And this would be stupid: We are united for the sake of one professional boxer and no other reasons aside from that.

I can really say that our Pambansang Kamao is someone we should be proud of since he brought the Philippine flag to the boxing ring, bruised Juan Manuel Marquez's ego in front of a worldwide audience, and went out of the ring victorious. Too bad Marquez can't accept that as of now.

@dan: not only marquez, even thousands o fmexicans can't accept the decision of teh judges