not your usual valentine trick 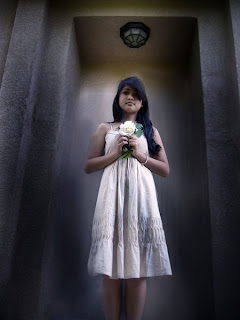 last night was relatively hotter than the other nights, 68˚F as compared to the usual 40-50˚F. i deviated from my usual bus route and took another bus that would drop me a block closer to our abode. the wind was calm. there was no hushing, no blowing and no whispering of an impending tragedy. the sky was generous enough to give way to the guiding light of the moon and the stars. everything appeared like the usual night at the los angeles valley, where every corner of the street was painted with the impression of absolute safety. everything was just like the other nights until i saw bouquets of flowers, balloons, teddy bears, and candles on the corner of the street’s intersection just a few steps from the base of the traffic light.

it was quite an unusual sight from what used to be a dark corner of the street. there were red roses, white roses, mums, and other varieties of flowers that you would usually associate with lovers, courting, flirting and with anything that has got to do with romance and hearts. add the presence of stuffed toys that acts like the guards of the flowers, the balloons and the candles. at first i thought of it as a prank, another gimmick by some freaks in the neighborhood, but after i saw the cards with embossed i love you in it, it occurred to me that it was no prank. it was another valentine trick. i found it cute though, maybe because of its sincerity, that despite its off location, you can sense the emotions of the person who might have placed it there.

i paused for a while a few meters from the spot; maybe a couple of minutes, anticipating a romantic scene from cross-street lovers where one lover runs from the other edge of the street to meet the other lover waiting on the other side of the street but nothing spectacular happened. no lovers have met on the spot, no romantic stuffs, no hearts, no cupid, no emo! well, i thought it would be nonsense of me to stay and wait there longer so decided to head home.

not long after i left my spot, i heard running footsteps toward the street corner where the flowers, and the bear, and the balloons, and the cards, the candles are. finally, the start of the romance under the stop lights! i stopped, i looked back, and i saw a lady in her mid twenties crossing the street back and forth. her appearance did not make her look like a crazy person, but crossing the street back and forth made me think there might be something wrong with her. it’s just absurd for her to run like that at night. she would check on the flowers and stuff and then run back on the other side of the street and run back to the side where the valentine gifts were placed.

no, i did not dare come near her. since most of my relatives here would tell me not to talk and bother with the business of strangers, i continued my walk home. on my way, i saw my father going to my aunt’s house just a few blocks away. i went with him and had a little chat with my aunt. she reminded me of being cautious and conscious about my safety and everything that i had to remember for survival in this foreign land. then somewhere, sometime among our deep conversation, she asked me if i have seen the bunch of flowers and candles on the street corner under the traffic light. i beamed and immediately said yes, saying that it was a little crazy but was a sweet thing to do. my aunt then covered her mouth and tapped my right arm in surprise.
“did you know that somebody died there? there’s a girl, victim of a hit and run. so you better be careful, ok?”

ok. now i know it was not the usual valentine trick to woo a lover.
Posted by bulitas at 1:31 am

i was thinking of something else but it seemd like there was a different twist at the end. hahaha. nicely written!

aww. imiss you too! apir!

The twist at the end is SOOOO FUCKING FREAKY IN SOOO MANY LEVELS!!!11

Makes me wonder if you just made that up or what...

Joshing!!! Y'know that I love ya and your writing to the point that even if you're making things up, I'd still believe you WTF! ;-p

@talamasca: it's true in many f*ck*ng levels! swear! wah! hha! thanks for the constant bitching and comments! hehe. apir!