fluid thoughts of an accused cassanova* 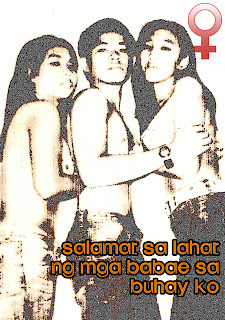 “i think most infidelities happen because of women. most of us, women have actually the higher tendency to commit infidelities than men.”
a friend told me while we were having dried fish, some scrambled eggs and corned beef over breakfast.

“it was true. i have experienced that before, and trust me, most women can fall easily for a fling.” another friend added.

the thin fish bone of tuyo planted its way down to my lower gums as the rest of the feminist world and social advocacy movement had an early celebration of the international women’s day.

looking back over the past relationships i had, i found out that most women (i am stressing the word most here because i do not absolutely consider with this post every female race on earth) would always wanted to feel pampered, caressed, served, accepted and loved. try to fail your girl in one of those aspects and in a couple of days, you’ll find out that she’s hanging out in secret with someone whom she can satiate her physiological, physical and emotional needs.

even women who claimed to be radical conservatives (those who would strictly stand by the societal norm), social deviants (those who claimed that they will not adhere to the norm of courtship and the teeny bopper type of relationship), modern day maria claras (those people who claimed to have an ounce of conservatism with a bit of modern philosophy in them. these are those people who would say that courtship is optional, but would later insist the act to her partner) would want to feel like a princess. collectively, most women have the i am-a-princess psyche with them, which most of the time, gives them the license to justify most of their actions with the consideration that the male species have to give them.

come to think of it, although most feminists would say that we live in a highly patriarchal society, the unwritten cultural and societal considerations given to women (esp in the philippines. take note of the mrt gender dichotomy bias) made the society’s piercing judgmental eyes less harsh to them.

say for example in a usual boy-girl relationship, where the couple would get themselves in a quarrel, and the girl would run away from the guy without having a decent conversation with him and would then shed buckets of tears, who do you think would the general public favor? of course, none other than the girl soaked in tears.

it was a general formula of the public to give their favor over the damsel in distress than the knight in shattered armor.

our early morning discussion brought up the reason why most women on this planet made such a fuss about third parties. according to my female friends, it was because they themselves have, in one way or another, plotted/thought/tried/experienced/dared to open another relationship outside their already committed relationship.

it was from the woman’s fear of karma, that doubt and jealousy comes.

women were lucky to have been endowed with the power of seduction and the power to manipulate emotions. having such powers made them such great contributors to the evolution of mankind and its civilization.

if ever the claims of my friends were true, i still believe that it requires both the participation and loyalty of a man and a woman for any relationship to work.

yeah, it's all a sign-signal-signifier fiasco! haha!

hmmm i don't really have much to say on this topic since first of all.. i'm inexperienced in this field. Haha.

but what I do agree about is your concluding statement. There's really no specific gender to blame, you know. The relationship is wholly dependent on both sides -- on how both the guy and the girl would "work" for their relationship.

Anyway is this related to your past post about something very particular with?

Hmmp but your right I still believe that on a relationship one must understand each others part, one is set to obey the hidden rules of relationship...mutual relationship that is.

You just gotta admit that women can sometimes be a poison to the opposite sex.

I'd say women have so complicated emotions, emotions that they could not handle very well. But still, if you would have observed, sometimes, they get over it as quickly as if it never happened. While it's true that women would always want to have their needs sustained, it is also considerable to say that we, women, are, sometimes, self-centered and possessive. Those traits are not very impressive in the real sense, but it's a fact. It just happened that we were made in that way.

And as you know, everybody would use their means to gain power. History says how powerful and persuasive women can be over men.

That photo of yours and your "Harajuku girls" kinda makes me feel funny inside. And I haven't the foggiest idea why. O_O

Well, one of man's greatest weakness is a woman. Hehehe. I don't need to cite the Bible for that (which I think is preposterous). Have you ever encountered a guy who can't say no to a damsel-in-distress? :-)

@ cars: tnx. u know relationships, it's always a mutual thing.

@ LA: haha. all of my posts were related in one way or another.

@ tea: yer right. know what, over my twenty years of encounter with the female species of this planet, i'd say the best thing that could describe women is that they are simply complicated.

@ tess: wah! i wonder why can't guys say no to a seemingly poor damsel who can actually stand up to her feet, wipe her tears and something to lift up her distress.
=)